23 News investigates how changes in the medical industry have dramatically impacted the Bedin Family of Rockford and how you can protect aging loved ones.

Part III
12/30/10
ROCKFORD (WIFR) — If you’re a baby boomer caring for elderly parents or in that age bracket yourself, it takes great planning to prevent the government from dictating your life. Tonight, we wrap up our special report, “A Growing Trend in Medicine” with the story of one local family’s fight to keep a public guardian from taking over and why some say they should be avoided at all costs.

Dolores Bedin’s family wants her final years to be lived in comfort.

So they’re building an addition on her Rockford home and making it wheelchair accessible. Dolores’ body may resemble the 86-year-old she is, but to her daughter, her mind makes her the Italian crocodile.

“When I see her do that (referring to Dolores’ ability to list all 44 U.S. Presidents) and see how smart she is, how competent and how in control she is in herself to have someone characterize my mother like that,” says Janet.

Characterized as incompetent, and Janet absent. Janet says Chicago’s Northwestern Memorial Hospital used those words in Winnebago County Court to argue why Dolores should be discharged and a public guardian control Dolores’ care. Dolores, who has inoperable pancreatic cancer, had been in the hospital about two months and felt too sick to leave.

“I didn’t want a day to go by without seeing my mom,” says Janet.

Janet feared her power of attorney would be revoked, so she took Dolores home. This prevented Attorney Sherri Rudy from taking over. She’s the Public Guardian for Winnebago and Boone Counties.

“If there’s concern that an individual is not getting proper care, proper nutrition, proper medical care, that will then be a request for our office to step in,” says Rudy.

Rudy is also Public Administrator and currently oversees a combined 39 cases or “wards,” most of whom are elderly.

“It’s overwhelming, it really is. In fact we’re hoping to get some help,” says Rudy.

Administrator’s services are paid from a ward’s bank account. If there’s no money for these services or medical care, she has the ability to sell their home.

“The most terrible, terrible things could happen to you under guardianship court. Your elderly parent could be removed from their home and put into a nursing home where they don’t want to be, they could be drugged in that nursing home, sometimes unnecessarily. Their property could be seized,” says Annie McKenna, Spokeswoman for the National Association to Stop Guardian Abuse.

To prevent falling under a public guardian’s care, NASGA recommends aging parents give their children a durable power of attorney and sign it before they get too old. Renew it over the years so it cannot be discredited in the future.

“She has been shrouded with this disease and this event where they’ve tried to steal more time away from me being with my mother by dividing us and separating us,” says Janet.

Bedin is especially frustrated because it wasn’t until after her court hearing did she learn a patient advocate reported Dolores is competent and the hospital’s only interest was sending her home.

Janet says after seeing that report, she tried getting the order vacated, but the judge refused. She says she has no plans to file suit against Northwestern Memorial Hospital at this time and just wants us to be aware of her family’s situation. I tried contacting the hospital for comment and to see if anything has changed since Dolores Bedin was a patient, but my calls were not returned.

Part II
12/29/10
ROCKFORD (WIFR) — Dr. Larry Verfurth works in one of the fastest growing medical specialties in the nation. He’s a hospitalist, which is a doctor whose specialty is hospital efficiency. Verfurth is one of 15 at Rockford Memorial Hospital.

And attractive to those young in their careers, since hospitalists are never on-call.

“Typically you’re seeing a lot of people who are straight out of their residency training who are going into hospitalist work,” says University of Illinois College of Medicine Dean Dr. Martin Lipsky.

That’s the case at RMH. Most hospitalists there are in their late 30’s early 40’s. Their job is to make you well enough to go home.

“The longer you’re in the hospital, greater chances something could go wrong. We could give multiple medications, there’s a lot of sick people in a hospital. So the sooner we could get you out of the hospital, it’s better for you.” says Dr. Larry Verfurth, Director of Adult Hospital Services at Rockford Memorial Hospital

It’s this argument drawing criticism from the Bedin family of Rockford.

“I just don’t want anyone to go through what we went through, it was a hellish nightmare,” says Janet Bedin.

Eighty-six-year-old Dolores Bedin has inoperable pancreatic cancer and was recently kicked out of Northwestern Memorial Hospital in Chicago.

“The hospitalist said I saw her get up from her bed to the washroom with no walker or assistance, so she’s ready to go home,” says Janet Bedin.

Daughter Janet Bedin says this note made Dolores ineligible to get Medicare funded rehab. She didn’t feel ready to leave, so she stayed. That is, until the hospital threatened to revoke Janet’s power of attorney and turn Dolores over to Winnebago County.

“I was beaten down and the fear of you’re going to lose your mother and you don’t know which way it’s going to go, freezes you,” says Janet.

Adding to the aggravation, Janet says she hand-picked all of her mom’s doctors. None of whom could get involved, leaving a stranger’s opinion the one that sticks.

“When you have a hospitalist, it’s even more important for you, family to be involved in the care and know your own health care,” says Dr. Lipsky.

And if a report doesn’t sound right, Lipsky says speak up immediately. Only four remaining Rockford Health Systems doctors see patients in the hospital. So we’ll most likely be treated by a hospitalist at RMH. The hospital is their specialty, a challenging one that deals with varying degrees of illness.

Hospitalists are growing in popularity since fewer primary care doctors are visiting patients in the hospital due to time and financial constraints.

At RMH, hospitalists are supposed to introduce themselves as one.

They typically doesn’t let patients opt out of their care. But those who don’t feel comfortable with a particular hospitalist can request a different one.

All Rockford hospitals use hospitalists and RMH plans to add even more in the future. As for the Bedin’s, Dolores was threatened to have a public guardian control her care all because of events triggered by that hospitalist report.

Tomorrow night at ten, we’ll examine what could go wrong when in a public guardian’s care and how to prevent loved ones from even reaching that point.

Part I
12/28/10
ROCKFORD (WIFR) — Time is more precious these days for Janet Bedin. Especially after learning she lost five months with her mom Dolores.

“If my mom didn’t get nauseous that day, maybe we would have never known,” she says.

Never known, she’s dying. In September, a hernia sent 86-year-old Dolores to a Rockford hospital. That’s when Janet says they learned Dolores has inoperable pancreatic cancer. How they found out? A cat scan taken at Chicago’s Northwestern Memorial Hospital months earlier, in April.

“The hospital has known information my mother is terminally ill, which cut into the quality time we could have spent with her and the planning time,” says Janet.

“It was like I was hit by a ton of bricks to know I have cancer,” added Dolores.

“I encourage patients to learn their test results whether they’re normal or abnormal, don’t assume hearing nothing means they’re normal,” says Dr. Martin Lipsky, Dean of the University of Illinois College of Medicine.

Lipsky says unfortunately communication errors happen all of the time. And with any tests, call to get results within a week. He recommends aging parents keep a list of medications in their wallets, along with diagnosis, allergies, and for heart patients, an old copy of their EKG.

“It’s important for family members to be very visible in the care of patients,” he says.

Lipsky suggests children get a power of attorney for health care. Janet has that right, and it was a battle to keep it.

In a rare move, Northwestern Memorial Hospital took her to court to get that authority revoked. Dolores had already been in the hospital two months and didn’t feel well enough to leave. So the hospital threatened to have a Public Guardian take over.

“How could you say to me I don’t have my mother’s best interest at heart,” says Janet.

Like most daughters, Janet didn’t want to lose her mom so she took her home. Janet is now juggling her career and caring for her dying mother.

The Bedin’s are now stuck paying for extensive medical bills because Medicare won’t cover Dolores’ rehab. Janet says that’s all because of what a hospitalist wrote in his report. A hospitalist is a doctor whose specialty is the hospital. Tomorrow on 23 News at Ten, we’ll tell you about a growing trend of hospitalists handling our care while admitted and what you need to know about this change in the industry. 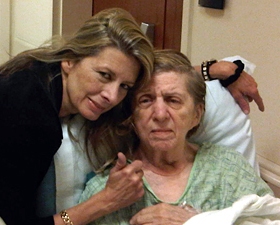 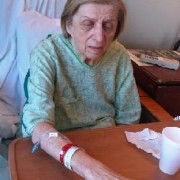 …Eighty-six-year-old Dolores Bedin of Rockford has been a pancreatic cancer patient at Northwestern Memorial Hospital in Chicago since September. Bedin tells me she doesn’t feel well enough to go home.

In a rare move, the hospital brought the case to Winnebago County Court, asking Judge Gwyn Gulley to kick Bedin out and revoke Bedin’s daughter Janet Bedin’s power of attorney. Janet tells me she agreed to take her mom home Friday for fear of losing guardianship. She says this is not about money, but her mother’s rights. Especially for a woman she says is competent.

Reporter’s Note: I spoke to Dolores Bedin via telephone from her hospital room. When I asked her to write down my number, she mentioned she was blind and promised to remember the number instead. Sure enough, she passed along the information to her daughter Janet.” ….