State of Indiana & State of Florida

LEAVING THE DOORS BEHIND HIM FOREVERMORE
by Beverly R. Newman, Ed.D.

Al Katz, my courageous Father, suffered more in a lifetime than 20 lifetimes of sorrow; for his life began before the Holocaust, endured through the Holocaust, and ended in state bondage known as guardianship. In the Holocaust, Dad was a slave laborer owned for seven years by vicious, insatiably-cruel Nazis. A little boy bending down in the cold to stuff crumbs in his starving mouth was shot on the spot through his head; my Dad, right there, vowed to live and to make our world good. He did.

In Florida State guardianship, Dad was locked up, at 89 years old, in the dismal, isolated basement of a metropolitan hospital, with a no-contact order, separating him for weeks from his family and friends. He relived the Holocaust here in Manatee Memorial Hospital, with fierce, penetrating fears of abandonment and confinement, his worst fears come true. I, his daughter, just outside the thick metal doors, was ordered to leave the premises by the police guarding the poor old man from the touch he needed for comfort.

Three weeks behind locked electronic, guarded doors, my Father relived, flashbacked to the Holocaust, when his adored parents and baby brother were murdered in mass killings of Jews. He could not help his own cherished family, and I could not help him 70 years later. In Germany, evil was good, and good was evil; now, seven decades hence in America, evil was good, and vice versa. As the Bible says, “Nothing is new under the sun.”

But where is the sun for a man who knows firsthand every sinister measure of mankind? My Father saw a child’s head blown off of his body for eating food scraps from the frozen ground, and he clung to that image to lift himself through the endless days of human servitude. He clung to a horrible sight and to the promise of the Almighty to save His children, which He did.

My Father’s suffering should have never been in the beginning of his life, and it should have never been in the ending either. A proud American should not have been locked up for the crime of being old and weak, but he was. When old age is a crime worthy of solitary confinement, a society has lost its soul, and so my Father’s life should serve for all of us as the image he kept in his head to head him out of the death marches and death camps one after another … one foot in front of the other, trudging through snow to keep that poor little boy from having his life brutally ended in vain.

In October 2009, when Dad’s public guardian released him from three weeks in lockdown at the city hospital, she immediately sent him to the rear quarters of an infamous nursing home, in lockdown behind heavy metal doors, for three more weeks, while I stayed merely four minutes away, waiting for months to be permitted to care for my Father. After two months in public guardianship, my Dad passed from hearty and mobile to a state of “IMMINENT DEATH,” as written on the guardian’s records. Never did I see a look of hatred deeper in the face of a woman than I witnessed on the day the public guardian sentenced by Father to lockdown. This picture is worth more than a thousand times a thousand words.

In my Father’s honor, I am launching the “Al Katz Campaign To Save Our Holocaust Survivors from Institutionalization”, in which they cannot escape the horrors of confinement and abandonment they lived in the Holocaust. They are trapped inside of their memories when they are institutionalized. Join me, please, to give these elders the time to die in peace in their own homes and with their families, unforsaken by those whose interests are in power and profit.

After months of wars against the State of Florida, I was blessed to care for my frail, ailing Father in his own home, 24 hours a day. Away from confinement, his flashbacks flashed away, and he felt a world full of love at his fingertips. I was his solace, and he was mine, knowing that I could ease his pain and protect him from lurking cruelty.

My Father passed away a poor man because his guardians and their hosts of attorneys could not stop their voracious feeding frenzies of Dad’s assets; but my Father took his final two breaths of fresh Florida air in his own bedroom near his daughter and the beautiful shorebirds just outside his glass doors. No thick metal electronic doors stood between him and Heaven, as God took him softly home.

From here on out, the gates are wide open for my Father. 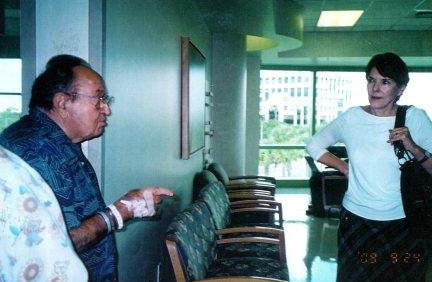 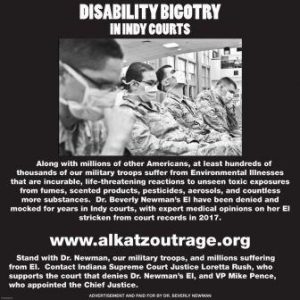