“On Sunday June 19, 2016 I visited Genevieve Bush. I was really nervous as I knew she was in an abusive guardianship. I shouldn’t have to feel so much anxiety as I did. I was so nervous. I was dropped off at the front. I went into the nursing home and saw Genevieve eating with the others. I asked a staff person if I could visit her and they said she was done eating so they rolled her out into the lobby area by the TV.

I sat down with Genevieve and read her a card. It was from her daughter and it read…”I love you Mom” and it had a smiley face on it.

Then my phone rang. I answered it and I was able to hold the phone up to Genevieve’s ear for her to hear her daughter’s voice.

At first Genevieve did not know who I was nor seemed excited to see me. She did not care about the card. Once the phone was to her ear,  she lit up.

She reached out and grabbed the card and started to smile.

She also looked as if she would start to cry. She then reached out and held my hand.

I spoke to her daughter on the phone told her how her Mom was reacting and then I put the phone back up to her ear and her Mom was noticeably happy.

I got 2 pictures of her Mom holding the card.

Her Mom definitely appeared to be happy at the sound of her daughter’s voice on the phone.

She continued to hold my hand and I gave her a hug.

Feeling nervous about being there  I left. I would say my total visit was about 10 to 15 minutes.When I look back on this. I suffered severe anxiety and all I was doing was bringing an older women a card that said “I love you Mom.”

Why I should have been made to feel so nervous is SO wrong. I am aware of how predatory abusive guardianship work and no one should ever feel as if they can’t visit a nursing home. Shame on Chester Co for what you have done to the Bush family.” 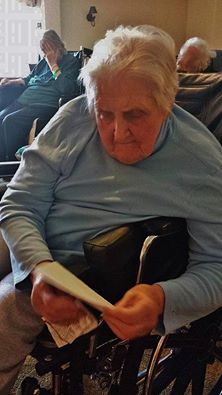 Elder Guardianship Cases Winding Their Way up to Federal Court

Mary Bush lives 20 minutes away from her 86-year-old mother in West Chester, Pa., but she’s not allowed to visit. In fact, Ms. Bush hasn’t seen her mother, Genevieve Bush, in 16 months because she was restricted from setting foot inside the Park Lane nursing home where the elderly Ms. Bush resides.

“I showed up on Jan. 27 to visit my mom and was told to leave by the administrator,” Ms. Bush told PacerMonitor. “When I called the police to report the visitation ban, I was assaulted by the officer.” Ms. Bush blames her mother’s court-appointed guardian Carol Hershey, who reportedly sent a letter stating Ms. Bush could no longer visit. …

Listen to Mary Bush on T. S. Radio with Marti Oakley – part one!