“My name is Kevin Kelly. I live in Manhattan, NY. My story is about the kidnapping and abusive guardianship of my grandfather, Richard Maass, at the hands of Mary Giordano, an elder care attorney and partner with Franchina and Giordano law firm in Garden City, NY. The late Judge Joel Asarch of the Nassau County Supreme Court in Mineola was the presiding judge who allowed these atrocious acts against my grandfather to happen, along with Anne Recht, the geriatric “care” manager of AMRecht Associates in Plainview, NY. I fought very hard to save my grandfather from these people; at a great deal of monetary, emotional and physical expense. No one in charge would listen; no one in charge cared; or so I thought, until I discovered that my grandfather was one of many victims of this particular trio; and one of thousands across the country.

My grandparents lived in their house in Glen Head, Long Island, since 1951. My mother and I moved there in 1981. We had our own apartment there and paid rent. We took care of my grandmother when she became ill until she passed in 1998, and we cared for my grandfather as his health started to deteriorate. Around 2001, he was officially diagnosed with Alzheimer’s. Mom then hired a full-time aide to care for Grandpa in 2005 after she became ill. My Mom passed away in 2006.

After my Mom’s death, I continued to live in the house, pay rent, and spent many hours every day with Grandpa. Due to many months of chaos after my mother passed, one of my cousins who lived locally started to come around. He somehow managed to have a “new” power of attorney drafted in 2006, giving him complete control of my grandfather’s estate. When I looked over the paperwork months later, I discovered there was over $40,000 in missing funds. My attorney and I requested that my cousin return the funds and discharge himself as POA but he refused.

Since we were unable to get things resolved, I had my attorney file a motion in court in 2008 to have my cousin removed as power of attorney and have me assigned as guardian. Judge Asarch assigned a court evaluator to investigate and file a report. The report filed stated that I was very close to my grandfather, that my grandfather was very happy living in his home with me and he recommended me as the best choice for guardian. However, my cousin stated that he would fight it if I was appointed. Our attorneys agreed that we would let the courts appoint a guardian. I was completely unaware of what that truly meant. Judge Asarch appointed Mary Giordano as guardian and Anne Recht as geriatric “care” manager. We signed an agreement whereby Mary and Anne would be paid out of Grandpa’s funds, $600.00 and $500.00 per month respectively to “care” for Grandpa. A new full-time aide was hired to care for Grandpa 24/7.

Judge Asarch ruled that because I was not immediate family, I had to move out of the house. Rather than fight a lengthy court battle, I moved to an apartment in Massapequa in March, 2009 and continued to visit. One day in September 2009, I called the aide to let her know I was on my way over and she told me that Mary Giordano called and told her to pack my grandfather’s clothes because she was moving him to a nursing home. Mary never called anyone in the family to let us know nor did she discuss this with anyone. The aide was as shocked as I was, since he was happy and doing very well in his own home.

I rushed to the house immediately. When I got there, Anne Recht was there and the aide was packing for him. I asked Anne where he was going and she refused to tell me, stating that he was better off not seeing anyone for the first few days so he could “acclimate.” I called Mary and she claimed his money was running out and could not afford to live in his own home anymore.

My lawyer and I requested a hearing immediately after Grandpa was kidnapped. He told me that he never received any paperwork and that what Mary did was illegal; that an order had to be signed by the judge and no order was ever signed. We requested a hearing on the matter. Judge Asarch’s only response was that the move was not handled “properly.” We also advised Judge Asarch that this new nursing home was not a safe location for him, that the home was very dirty and smelled like urine; that it was very short-staffed. He was also forced to eat a kosher diet since non kosher food was not allowed. He was not allowed to have something as basic as a ham and cheese sandwich. In answer to our complaints, both Mary and Anne stated that Richard Maass was “very happy there, smiling and nodding and very talkative.” My grandfather was not at all talkative and only spoke with people he knew. They also stated that he was “too old to be eating what he liked anyway and should be on the nursing home’s diet.” Judge Asarch ruled in favor of Mary and Anne.

When Grandpa was first moved to the nursing home, the staff would always answer my questions and willingly discuss his care with me. However, as his health continued to decline and my aunt and I voiced our concerns and complaints, Mary Giordano advised the staff that they were no longer allowed to answer any of our questions or address any of our concerns. Only Mary Giordano and Anne Recht had that right.

By January 2011, my grandfather’s health had deteriorated substantially. At that time I was visiting him daily and my aunt and I requested that he be moved to hospice. However Anne Recht claimed that he was too sick to be moved. We then requested palliative care. Anne said she would take care of it. There was never any sign of this care and it was apparent that his suffering and pain was increasing each day. When my aunt and I complained to the nursing home, they told us that no paperwork was ever submitted by Anne and they could not do anything for him at all without her approval. Nothing was ever done despite all of our calls and requests. I had to watch my grandfather suffer daily, in tremendous pain, until the day he passed away, February 28, 2011.

On the day of my grandfather’s wake, I arrived at the funeral home with my father. There was just one wake being held at that time. When I walked into the room, I was shocked to discover that it was not my grandfather who was in the casket. I approached the funeral home director who told me that my cousin contacted him and told him to change the date; that Mary Giordano was aware of this and in full compliance. The reason given was that a family member from Florida needed time to travel, which I knew to be false.

When I called Mary she claimed she had sent an email to my lawyer informing him of the date change. My lawyer advised me that he never received any such email. Mary’s secretary told me a different story. She said the reason the change was made was because they could not get a limousine that day. When my aunt called my cousin to find out what happened, he claimed that he changed the date because another family member from Vermont needed time to travel. To this day, we never found out what the truth really was.

That was one of the most difficult days for me. I had to contact family and friends and let them all know of the date change. Some were already on their way; some had sent flowers. My grandfather’s pastor was unable to give the eulogy on the new date due to previous commitments. What upset me the most was that all of these people–my cousin, Mary Giordano, Judge Asarch and Anne Recht—not only ruined the last few years of this wonderful man’s life but could not even show him any respect in his death. None of these people loved or cared about him, but I do believe they loved his money.

I cannot even begin to tell you how much pain this situation has caused me. Every day I think about him and wonder what more I could have done to save him. It is now almost three years since his death and I miss him every day.” 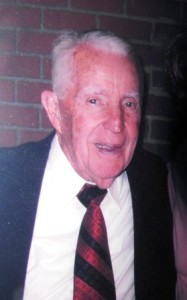