A 53-year-old woman who was placed in a temporary conservatorship at the request of attorneys for the Vanderbilt University Medical Center is fighting to keep the conservatorship from being made permanent even as she is being shuttled by ambulance from one facility to another.

Reba Sherrill, a paraplegic as a result of being hit by a car, said in an interview that she was taken  from Vanderbilt to a nursing home, then back to Vanderbilt over her protests and today to a nursing facility in Robertson County.

“It’s the most atrocious thing I have ever experienced,” she said.

Vanderbilt Medical Center did not respond to requests for comment as did the three attorneys representing the facility.

In late August, Vanderbilt’s attorneys, petitioned Davidson Probate Court to place Sherrill in a temporary healthcare conservatorship so she could be transferred to another facility.

The petition stated that Sherrill, who was admitted to Vanderbilt on Aug. 8, “no longer requires acute hospital care but instead requires admission to an appropriate facility.”

She had been admitted to Vanderbilt for treatment of physical ailments.

One day after arriving at the nursing home, Richland Place in Nashville, a facility she chose, an ambulance driver appeared telling her he was going to take her for a ride.

She said she was brought back to Vanderbilt and was there  for five or six day when she was transferred to The Waters at Robertson.

Between  the time she went to Richland and her return to Vanderbilt, her conservator had filed a report showing she had won a substantial settlement from the accident. The conservator also moved to force the settlement money to be deposited with the court. The motion was granted.

As a result of the latest move, Sherrill said it is unlikely she will be able to attend a Wednesday hearing on the petition to make her conservatorship permanent with a lawyer, Cathryn Armistead, named in Vanderbilt’s  original petition to act as the overseer of her health, finances and everything else.

Her attorney has filed a motion to have the conservatorship dismissed, or in the alternative, to have her brother named as conservator. The dismissal motion states that under state law, an action for a conservatorship must be filed in the county where the person resides and Sherrill owns a home in Sumner county and she and her family have lived there for decades.

In the meantime, Sherrill said she has been dosed with a powerful anti-psychotic drug, Haldol, to which she is allergic.

She said a doctor who has been overseeing her care for years filed an affidavit confirming she should not be administered the drug. She said she already has been injected with Haldol multiple times. 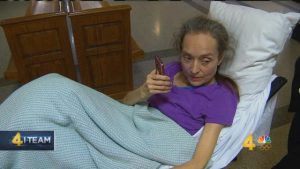 After a lengthy court hearing today, a Sumner county woman won a partial victory when a Davidson probate judge agreed to replace her current court appointed conservator with her brother.

Reba Sherrill had been placed in a limited health care conservatorship in August based on a petition filed by attorneys for the Vanderbilt University Medical Center. The hospital said in its filing that she no longer needed acute hospital care but needed to be transferred to an appropriate facility.

Sherrill, who is a paraplegic, had originally been admitted to Vanderbilt on Aug. 8 for medical treatment.

The hospital also petition sought to have Cathryn Armistead, a Nashville attorney appointed as a temporary conservator with the power to transfer Sherrill.

Kennedy approved the petition, including the appointment of Armistead.

Interviewed today following the lengthy hearing, Sherrill said she was happy with the outcome even though her motion to have the conservatorship finally terminated was denied.

“We made a compromise,” she wrote in an email.

Just after Sherrill was transferred to a Nashville nursing home under Kennedy’s original order, she was brought under protest back to Vanderbilt.

She has charged that she was injected with a powerful anti-psychotic drug, Haldol, to which she is allergic.

Sherrill was brought back to Vanderbilt after her newly appointed conservator filed a report with the court showing she had a substantial settlement from the accident which left her as a paraplegic.

From Vanderbilt she was transferred to a Robertson County nursing home, once again over her protests.

Attorneys involved in the litigation have not responded to requests for comment.

A Sumner County woman who won a partial victory in an attempt to get out of a conservatorship now may be faced with some $20,000 in legal bills and nearly as much in health care costs she never agreed to incur.

The fee requests were filed by Corletra Mance and Cathryn Armistead. Mance is seeking $7,605, while Armistead is asking for $13,469.19. Mance billed at $150 an hour while Armistead billed $175 an hour.

“I didn’t hire those people. I didn’t ask for these people” Sherrill said in reaction to the billings.”They held me hostage. Vanderbilt should pay the bills.”

Both Armistead and Mance were appointed by Davidson Probate Judge David “Randy” Kennedy after Vanderbilt University Medical Center petitioned the court to appoint a temporary conservator who could approve the transfer of Sherrill to another facility. The petition stated that she no longer needed the level of care provided by Vanderbilt.

Kennedy approved Vanderbilt’s requested appointment of Armistead as Sherrill’s temporary conservator and he named Mance, as a guardian ad litem, with the assignment of investigating the case and making a recommendation to the court.

No sooner had Sherrill been placed in a nursing home over her strong objections than she was shuttled back to Vanderbilt and then off to a second nursing home.

He also issued an order forcing Sherrill’s lawyer to turn over to the court the little over $1 million she won in the settlement of a claim filed in following an automobile mishap which left her as a paraplegic. She was hit be a car over a year ago.

Vanderbilt officials and their attorneys have not responded to questions about the reasons for their actions.

Sherrill said Vanderbilt should be paying the legal bills.

“I didn’t start this mess. Vanderbilt did,” she said.

Though court records show that the medical institution that filed the petition often is charged with paying such legal fees, Kennedy dismissed Vanderbilt from the case when he appointed Alexander Sherrill, Reba’s brother as her conservator.

Asked who she expected would have to pay her bill, Armistead said that under the circumstances she would expect that Alexander Sherrill would be the one to pay the bill, since Reba is under a conservatorship she lacks the legal capacity to execute a contract.

“I expect the conservator of her estate to pay,” she wrote in an email response to questions.

She noted that Sherrill’s attorneys had entered into an agreed order acknowledging their client was in need of a conservator.

Mance said that she also has been dismissed from the case adding that in the past on such cases when a person being conserved has assets the fee is collected from the filer of the original petition.

Ultimately, both Mance and Armistead said, it will be up to Kennedy to decide who pays the legal bills.

Meanwhile Sherrill says she received a bill for $19,000 from the nursing home where she was sent.

In addition to the legal fees, court papers indicate a bill will be filed for the time Sherrill spent in the nursing home.

The court appointed conservator for a Sumner County woman, who was placed under court control despite her protest, charged $437.50 to pick up shampoo and soap for her ward, court records show.

Records in the case of Reba Sherrill, who was placed under a conservatorship at the request of the Vanderbilt University Medical Center, show the shopping trip, which took 2.5 hours, was just one of dozens of charges billed by Cathryn Armistead, who was appointed as conservator over Reba Sherrill.

Other items on the 11-page payment request filed by Armistead in Davidson Probate Court include $595 to attend an August hearing on the conservatorship case and $297.50 to go to Regions Bank to check on a bank balance and set up a new account for the conservatorship.

Sherrill has fought the conservatorship and eventually managed to have her brother replace Armistead as her conservator.

Other items on Armistead’s bill include $577.50 to attend a recent hearing in the case and $560 to prepare for that hearing.

Armistead, in response to questions, indicated she expects Sherrill’s brother, who was appointed as her conservator, to be responsible for paying her bill.
Contact: wfrochejr999@gmail.com