My 94 year old father, Jim, was living at his own home for 6 years following the death of my mother 7 years ago. He fell and hit his head and had a traumatic brain bleed causing him to be placed in the North Carolina Veterans home in Black Mountain for therapy.

My younger sister was his POA at that time. When I went to see him last Christmas, he said he was unhappy staying there. I asked him how long he will have therapy and when he planned to go home. He told me he didn’t know. A few months later we had been talking on the phone and he said that my sister told him he couldn’t go home because he would need 24-hour care and she wasn’t willing to spend his money on it.

He told me she wanted him to die there.

I was upset and started looking for help for him, either to move to an assisted living apartment and somewhere where he could have friends. He asked me to come to see him because he was having difficulty hearing on the phone. So two days later, I got down there from Indiana and I was shocked to hear what was coming out of his mouth. He said my sister and brother-in-law were stealing things from his house without his permission; he was especially upset that she had taken all of the Henn family mementos and wouldn’t return them.

I vowed to help him and he stated he wanted to go see his house. So we started leaving the facility and the nurses told me and him that if I take him out of the facility, I would be arrested for kidnapping per my sister’s order.

Then the Social Worker came and started telling my dad he was incompetent and had no business outside of the facility. So my dad and I returned to his room and he called his attorney and said he wanted to change the POA to me.

The attorney came and he changed it for him; the social worker called my sister and told her and she immediately got on a plane to come down from PA. She threatened to kill me and also raised her fist at my dad and told him, “good luck paying your bills now”.

So my dad and I went to his house and he took note of all of the things she had taken from his house. When we got back to the facility, she had been in there and ripped up all my family photos. My dad said he wanted to leave the facility so we made plans to move him to Indiana with us.

A week later we had moved him to Indiana and he was so happy!

He met his great grandchildren and spent time with all of us telling us the family stories. He was able to drink a glass of his favorite Italian dry wine with meals. We transferred his vet benefits and set up appointments for his visits there and with other needed doctors. He went for his daily walk and helped us around the house as he was able to. He felt the comfort of a family life and being able to feel needed, wanted and loved!

Then my sister got an attorney, restraining order and told the court that my father was in danger being with me. Interim guardians were appointed and they forced him to go back to NC–he had to pay an ambulance $3500 out of his own pocket for it!

I followed in the car as I wanted to be with him as they were settling him back into the nursing home. They told us he would only be there for 2 weeks. They lied. The ambulance drivers were weaving in and out of traffic, going over 90 mph. I was going 80 and couldn’t keep up with them. I called the company and told them they were driving too fast and erratically. No one listened.

When I got to the facility the Interim Guardian of his person Stewart Moran told me to stay away from him as they unloaded my dad. I didn’t listen and he called the cops on me. My dad who was glad to see me, kissed me and said, “I don’t think I will ever see you again”. I tried to reassure him that he would.

Then I was told that I would not be allowed to talk with my dad until the end of the hearing. My sister couldn’t either. No phone calls, no mail, no visits, no sending things directly to him. They even confiscated the cell phone I bought for him! The nursing home was in on it too. They enforced what the Guardian of his person said to them. Absolutely no contact with family or friends because of “undue influence” that could happen. which quite frankly they were doing to him.

Then instead of having the hearing they decide to order a battery of tests to prove that my father was incompetent. So they hearing was set out for a month. He had the tests and they proved that he had some cognitive difficulty– but they also said he was paranoid, which he wasn’t. They had also started giving him an anti-depressant drug at night as they said he couldn’t sleep. This drug, Remeron, is contraindicated for people with heart disease, which he had, but they gave it to him anyway. During this waiting time, I contacted everyone I could find to listen to the inhuman and unjust treatment my dad was getting, stripping him of his rights, treating him like he was worse then a criminal!

He didn’t know those people telling him what to do and one day about 3 weeks ago, he was allowed to make a phone call and he called me and I told him it will all be over soon, to hang in there and that I loved him.

September 28th, 2017 was his hearing. I prayed hard for him to be able to get his freedom. He died on the way to his hearing–God freed him of the pain and suffering he had. And he did get the last word on his freedom.

I’m sad for anyone who has to go through this, it is cruel and the most horrible thing to do to our elderly loved ones. I am vowing to not let his death be the end of his legacy–I plan to fight for guardianship reform for others. We must do better, we must not let the courts dictate how our loved ones are cared for. It just isn’t right. 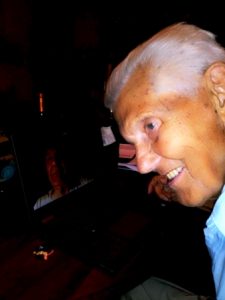 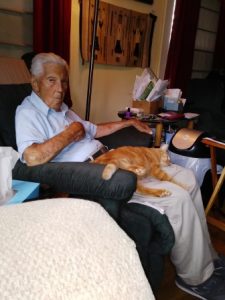