NOT WITHOUT MY MOTHER!!!
A VICTIM’S STORY FROM MINNESOTA TO GREECE

On May 2, 2016, my mother and I fled from her Minnesota guardian and Judge who collaborated with attorneys to create a guardianship based on a fraudulent diagnosis.  The only thing wrong with my mother was that she had two sons that continually pursued her, at the expense of her life and her health, for control of her estate.  As a result of family discord, the racketeers banded together to create a lucrative guardianship.  After my mother suffered isolation and inappropriate drugging with the judge’s approval for almost two years, we determined the only way out was to run, and run we did!  My mother and I are currently living in exile in Greece; the country she immigrated from.

Her guardian, Dan Lodahl, principle of First Fiduciary Corporation (City of Eagan) has many complaints against him.  These complaints are well known throughout Minnesota, but are consistently and systematically ignored and hidden from the public.   Mr. Lodahl and his wife, Michelle Lodahl, use unethical billing practices while forcing wards to submit to their demands through false imprisonment, isolation, and inappropriate drug ingestion to promote unconsciousness and early death.  Dan Lodahl is the Jared Shafer (Nevada) of Minnesota: untouchable.

My mother recently told a reporter, “When my husband died, everyone came after me just because they could.  I had a life, a home, money; they took everything.”  Family members, attorneys, a physician, a Judge, a guardian and assisted living facility staff perpetrated incomprehensible cruelty against my mother and I.  We are law abiding citizens, professionals in our field, that are now fugitives seeking refuge from criminals.

For three years, as the guardian and judge fraudulently denied knowledge of my mother’s whereabouts, my mother was completely dependent on my VA disability for all her living and medical expenses.   The guardian continued to bill her estate thousands of dollars for his salary and expenses that he created without a ward in his jurisdiction.  The guardian did everything in his power to deny my mother’s request for her social security income, which she finally received in 2019.  He had, and has, no concern for the welfare of ‘his ward.’  She is simply a cash cow.

Despite notifications to the guardian of his ward’s location, he and the judge continue to declare her as missing – hoping to make it to the four-year requirement in Minnesota that allows them to designate a missing person as deceased (Death in Absentia).  This would give them faster access to her estate in probate court, which they can utilize to deplete her entire estate to fill their own pockets.

Although we are free, we will never truly be free.  After a lifetime of dedication to her work, and carefully saving for her future security and that of her children, my mother cannot afford to live the life she worked for.  She lost everything to guardianship.  I lost everything to save her.  Our losses are much deeper than financial; we cannot spend our senior years with our children and grandchildren and we cannot live the life we planned.  We live in constant fear of being pursued.  We are forced to live a life in exile while unwillingly relinquishing control of my parent’s estate and family legacy.  We cannot return to the United States or I will be sentenced to jail and my mother will be forced back into human trafficking.

Currently, the only way out of guardianship is to let the racketeers steal your estate, accept defeat, and escape the country to regain your freedom – your life. 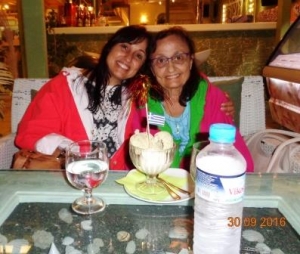 Please read about our escape to Greece on Marti Oakley’s PPJ Gazette.

“I have a warrant out for my arrest because I saved my mother from criminals. The warrant was put out by the same judge and guardian that stole my mother’s freedom and her estate.”