My name was Joe – I am gone now so it is too late to cry for me. I am so sorry to have left my daughter, Sandi, to finish fighting my fight.

I had dementia but I knew who she was until the very end.

It was not all my fault.  I survived traumatic brain surgery at age 85 after my wife accused me of drinking which I was not and ended up falling on the concrete floor of the garage. I was airlifted to Tampa General where I stayed for 77 days and nights. The doctors did not think I would make it thru the surgery but I proved them wrong.

The only good memories I have after that were of Sandi and her husband Mike and my beloved dog, Cody.

I ended up somewhere that they called a nursing home. They would not give me water when I asked for it. Food and medicine I did not want were shoved down my mouth. My dentures were never removed to be cleaned….they did not care about how I looked. I was always clean-shaven and they allowed me to almost grown a beard and did allow me to grow a mustache.

I had bugs crawling around the room. The curtains were ripped. The roof was leaking and garbage cans were all over the hallways.

I was lifted in a very painful chair to be taken to the shower where on the way they pushed me into the walls many times when they were trying to turn corners.

They took away my hearing aides to make my dementia worse.
They would not allow my daughter Sandi to bring in an ophthalmologist so that I could at least see the TV…….I had a window……..that is all……for 7 years, I had a ceiling to look at……a screen on the wall that I could not really see……but I did see the flowers that Sandi and Mike brought me every weekend.

My room mate, Lee, told the nurses I needed to go to a hospital and they told him to mind his own business.

I don’t know why my hearing aides were taken away from me.

I had wanted to go to VA nursing home for a long time……….but I no longer had a voice. Only Sandi could hear me but she was unable to do anything until I died.

She did give me my final dignity and I hope that as I taught her she continues to fight for the wrongs that were and are still being done to everyone in that horrible place I had to exist for 7 years.

My daughter received a Presidential Certificate for my service to my Country in WWII Navy. I was a Veteran. They let me die as a person without a voice…….I was 92 years old…….My name was Joe……. 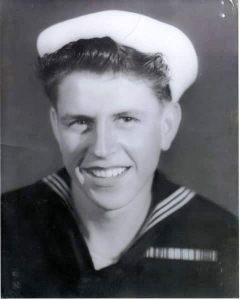