Harold Greer is a 85 year-old veteran of the Korean war who had a massive stroke on March 2, 2012 at his home in Chatsworth, Illinois.

He spent the first eight days at our local hospital before being sent to nursing home for rehab.

I spent the first four months with him -12 hours a day – to make sure he got the care and therapy he needed. His son notified the family that Harold  probably would not make it so better come to see him. Since I had been with Harold from day one, and  I knew what the doctors had told me, I didn’t believe Harold wasn’t going to make it.

His family did every thing they could to make him crazy and to prove him mentally incompetent. They even brought people from Chicago area that Harold knew, trying to confuse him.

They had me barred from nursing home, so I couldn’t protect him. They had me charged with three counts of abuse, so they could get PoA and Guardianship. They closed out his bank accounts and took his new car and had him moved to a nursing home in another town that didn’t have a therapy department.

They told him I was in the hospital dying of cancer and told me I could never see him again. Also, many times he was so medicated he didn’t even know where he was.  Harold was left handed and wasn’t able to write because the stroke affected his left side, so how is his signature on many of the legal papers?

Also he is not allowed to have any visitors, except his family, and he had many friends in Bloomington he doesn’t get to see and enjoy. 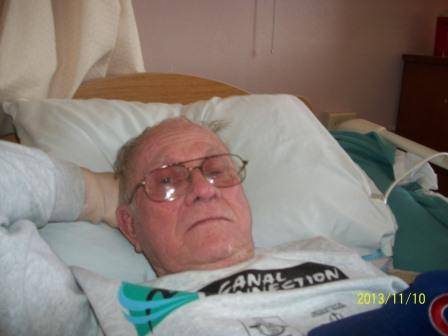