When Esther Johnson became vulnerable, her wishes and needs were denied, her estate plundered, and her dignity neglected. Even though she named her son Taylor as her DPoA and even specified he would be her guardian if needed, she didn’t get what she wanted. Instead, Esther’s daughter was named guardian. She confined Esther to her bedroom, denied her visitors, and only allowed Taylor to see their Mother one hour per week and those supervised visits cost Taylor over $100 each.

No one was allowed to mention Taylor’s name or answer Esther when she asked about him.

The 3 1/2 year nightmare, which Esther Johnson suffered and which directly caused her death, revolves around the Probate Court structure in the Commonwealth of Massachusetts, and the courts absolute refusal to abide by the existing protective laws for the elderly.

Esther Johnson suffered many abuses and torture before her homicide on December 30, 1998.

As a society, we can and must protect the human, civil and constitutional rights of seniors. Every person deserves to live a full life with dignity. Every person must be guaranteed that their wishes will be carried out, assets protected and dignity preserved. 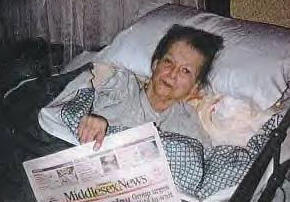