Ernestine Franks was born in Pensacola, FL Escambia County where she has lived  soon to be 92 years. Her childhood was that of most of her era hard workers and close family that suffered but gained insight from the Great Depression and WWII. She went off to Bowling Green Business College were she majored in business.

Upon her return she was employed by GMAC and held down two other part time jobs. She met her future husband Charles Watts Franks at one of her part time jobs at Walgreens. Charles asked her to pick out a bathing suit for him then he asked her out.  They were married soon after and spent the next 53 years raising their three sons and serving their country at Pensacola Navel Air Station in the Civil Service. Ernestine was in Cost Accounting and moved up quickly to a supervisor  position. Charles was a top metalsmith of over 33 years.  If a job was to hard for someone else the word was  “Put Franks on it.”

They saved their money and invested it wisely and put their children through the best schools to ensure they would get the best education. They were quite involved with their children from band to football games  to going on over seas trips to England and China. Ernestine was even the manager for her middle sons rock in roll band in the 70s.  Ernestine and Charles’ life was devoted to their boys and always went the extra mile for them.

In 2011 Ernestine health became more of a concern of her children. Safety measures were implemented for Ernestine. Her home care turned into 24/7 care, 8 video cameras that sent notifications if any movement was detected inside or out at nighttime, and video conference with her on her iPad. Home improvements were also made including a stair lift, ramps, guard rails inside and outside, grab handles, and a glass front storm door.

In 2012 one of her children was told by a attorney that the best care for Ernestine was to be in a Guardianship. Not being fully aware of how life could change he proceeded to set in motion the wheels that he would later find out stripped her of all her rights and dignity, isolated her from her children and the outside world but also sacked her life savings. Her attorney fees are closing in on $100,000.00 in just a years time. Ernestine faces the end of her days with the prospect of being alone but if she lives long enough she will find her loneliness to be in a state run institution because she is broke.

The only crimes Ernestine committed was working hard, saving her money and just living to long. She and her husband contributed greatly to the city of Pensacola and in the end it was the city’s elected and legal representatives that turned their back and took advantage of her vulnerability. Her civil rights were stripped away by a three panel committee that lied to the court about her capacity. The Dr. that did evaluate her just two days before her court date opinion after a four hour evaluation was she was of sound mind to pick her guardian and understood the ramifications of such a decision. His opinion did not fit what the court wanted the out come to be so it was discarded.

Charles and Douglas Franks say that is what happened to them. As their 89-year-old mother grew increasingly frail, the brothers clashed over where she should live—close to Charles in New Orleans, as he wished, or in her own home in Pensacola, Fla., as Douglas wanted. In 2012, Charles says he followed the advice of a financial adviser and petitioned a state court in Pensacola to appoint a guardian to settle the matter.

Their mother, Ernestine Franks, had granted Douglas a power of attorney and signed advance directives designating him as her guardian if she were ever deemed incapacitated. But a probate judge nullified the power of attorney and appointed a professional guardianship company instead. “There seems to be a lot of conflict” involving the Franks brothers, said Judge Jan Shackelford in the initial proceeding, according to a transcript. A judicial assistant says Judge Shackelford couldn’t comment on pending cases.

Soon after being appointed, the guardianship company, Gulf Coast Caring Solutions in Pensacola, suspended the brothers’ visits to Ms. Franks for three weeks and later permitted them for only a few hours at a time, citing their conflict. The brothers, who have since repaired their rift, say their relationship with the guardians quickly became contentious. As a result, the judge ordered that their visits with their mother be supervised by a monitor, who charges Ms. Franks $100 an hour.

Under guardianship, withdrawals from a $1.3 million trust set up to pay Ms. Franks’s expenses jumped to $297,000 in 2014 from $94,000 in 2011, when Ms. Franks mostly made her own financial decisions, according to documentation provided by the Franks brothers. More than $75,000 in 2014 went to lawyers for Gulf Coast, which has been embroiled in litigation with the Franks brothers over issues ranging from expenses to home-care providers. The company said in a court filing this month it was resigning as guardian and recommended the appointment of a successor. A new judge overseeing the case scheduled a hearing for November.

Gulf Coast and its attorneys didn’t respond to requests for comment. In court filings, the company accuses the brothers of harassing its caregivers and of unsettling their mother with the squabbling. Gulf Coast says that from the start, the brothers have “engaged in a relentless battle against the guardian” in an attempt to get the company removed and “regain control of their mother and her finances.”

Charles Franks says initially he thought seeking a guardian would be “a good thing.” Now, he says, “I am tortured by that decision.”

Who Makes Decisions for Your Elderly Loved Ones?

ATLANTA – Many aging loved ones have plans for when they are no longer able to make decisions for themselves, but are those plans legally binding??

Advance directives — legal documents like living wills and power of attorney — tell your family, doctors and the court your plans for end of life care.

But Channel 2’s Dave Huddleston spoke with families who said they lost custody of their loved ones because those advanced directives weren’t honored in probate court. 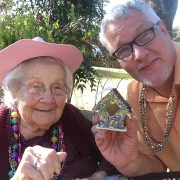 “My mother made it clear who she wanted to take care of her and where she was going to live for the rest of her life,” Doug Franks told Huddleston.

In his mother’s advanced directives, 94-year-old Ernestine Franks said she wanted to stay in her Pensacola, Florida, home, and have her son, Doug, be her guardian when she could no longer make decisions for herself.

Doug Franks, who lives in Austell, already had power of attorney.

But after Ernestine Franks was confronted by a scammer while home alone, older brother, Charles Franks, wanted mom to move near his home in New Orleans. He said he contacted his mother’s trust who suggested a private guardianship company step in.

“He stated this was the biggest mistake he’s made in his life,” Doug Franks said.

Charles Franks also spoke to Channel 2 and explained his regret about the decision.

The brothers’ dispute landed in court.

In August 2012, a Florida probate judge said Doug Franks was unsuitable and unfit to act as guardian because of the dispute.

“We got in trouble because we wanted the best and we had different opinions what was the best for our mom,” Doug Franks said.

“It was sad,” Doug Franks said. “The entire way, I drove back thinking I let my mother down, and she’s never let me down.”

According to court records, the sons’ visits with their mother were limited, and mostly supervised.

Gulf Coast Solutions asked the Franks brothers to not contact their mother three weeks after the guardianship was finalized so Ernestine Franks could establish a routine and bond with her caregivers.

Gulf Coast Solutions and Synovus gave up their rights to the Franks’ estate and Ernestine Franks in November 2014, citing a challenging relationship with the Franks brothers.

A Florida Judge appointed CPA J. Alan Kohr as her guardian and conservator. According to court transcripts, Kohr had been court appointed to serve as guardian or trustee in Escambia County, Florida, 46 previous times.

“It’s a dark cloud that’s over us all the time,” Doug Franks told Huddleston.

According to Escambia County Court system, guardianship cases are not handled solely at the discretion of the judges.

“Like all other cases in the judicial system, there are statutes, rules and other legal authority that apply and judges use their discretion and judgment within the parameters of the legal authority,” Susan A. Woolf, general counsel for Escambia Courts, told Channel 2 by email.

Humphrey said Georgia probate judges rarely void advance directives, and private guardianship is nonexistent in Georgia, but can effect Georgians with loved ones in other states.

In places with a high retirement population — like Florida — adult guardianship is big business.

“Possession is nine-tenths of the law and unfortunately, once they become under guardianship, they’re like your child,” Humphrey said.

When a loved one lives out of state, it puts them at risk.

She said private guardianship companies, and individuals, can take advantage of an isolated elder.

“They’re in it for the money. It’s a business, so they’re going to treat your mother, or your father, like a business,” Humphrey said.

Humphrey, and other experts, said living far from an aging loved one puts them at great risk. They also said an interfamily dispute often leaves probate judges at a loss as to how to deal with the aging relative.

According to the National Guardianship Association, nearly 3,000 jurisdictions regulate guardianship nationwide and everyone is different.

While they stressed there is a great need for guardians and many do a great service, but not a lot of information on guardians nationwide aren’t tracked, so abusive practices, even the number of guardians, is unknown.

Channel 2 spoke to other families who say their loved ones’ advanced directives were voided by probate judges, but most guardianship records are closed so it is hard to know why a judge thought a company would be a better guardian than the family member named in the advance directive.

After a four-year fight, the Franks brothers said the guardianship company gave up, because the cash dried up. It was nearly $2 million.

The case went to mediation and the brothers were given guardianship of Ernestine Franks.

They consider it a blessing to have their mother back.

“I was lucky, I was lucky as hell,” Doug Franks said. “We’re going to get her back. The key is to help other people, too, so this doesn’t happen to them.”

Doug Franks has been working with legislators in Florida and families across the county to strengthen guardianship and probate legislation.

He told Huddleston he is now in the process of moving to Pensacola to be closer to Ernestine Franks. 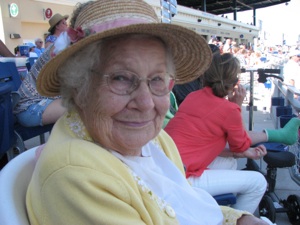 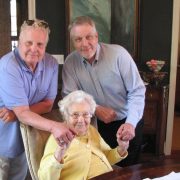 We mourn the passing of Ernestine Franks, December 16, 1016.  Godspeed, Ernestine. 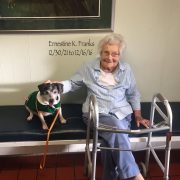