David Italiano is a 71 year old man with a disability who reported that his wife was being physically abusive, which activated an investigation by the Older Adults Protective Services. In 2019, the Huntingdon-Bedford-Fulton Area Agency on Aging petitioned the court to place David under a temporary guardianship, claiming that guardianship was needed to protect David from an abusive wife. However, when David’s wife died in August of 2020, this threat was essentially eliminated.

Mr. Malee, David’s court-appointed guardian, forced David out of his house and into a long-term facility in Lycoming County, the Embassy at Loyalsock, a two hour drive from David’s home.

While at Embassy at Loyalsock, David reached out to Roads to Freedom Center for Independent Living, a disabled people’s group that assists people with disabilities to return to the community. David asked the advocates there to help him leave the facility and return to the home that he owns in Huntingdon County, PA. Because of the guardianship, David had to petition the court to restore his competency before the state would let him go home.

In May 2020, David underwent a neuropsychiatric evaluation by an independent provider, Dr. Tulak. Dr. Tulak’s report concluded that David is competent. Mr. Malee agreed that Roads to Freedom should assist David to get in touch with the Independent Enrollment Broker (IEB) to start the Waiver enrollment process. This would permit him to receive any in-home services, if needed.

However, David’s social worker, Alicia Stiger, then repeatedly denied David access to his own medical records. Finally, Roads to Freedom brought this violation of David’s rights to the Pennsylvania Department of Aging, at which point he was finally given his records.

In January 2021, David attended a virtual hearing. At that time Judge George Zanic ruled that David remained incompetent and appointed Huntingdon AAAA as his guardian.

A staff member at Roads to Freedom makes inquiries and finds that it is against HAAA’s stated policies to gain guardianship of their clients. In fact, the Executive at the Administration for Community Living, during a phone conversation with RTF staff, denied that such a situation was even possible.

Even more strange, they have learned that the judge in this case has a potential conflict of interest. The Huntingdon county website states that Judge Zanic, prior to being elected as Judge President of Huntingdon County, served as the solicitor for the Huntingdon/Bedford/Fulton Area Agency on Aging, the very organization under consideration for a bizarre and potentially unethical conservatorship arrangement.

The Huntingdon AAA then stated that David was forbidden to communicate with Roads to Freedom staff in relation to continued advocacy or transition services, claiming that David felt harassed by RTF staff and that David no longer wanted the support of RTF.

David denied this claim during a phone conversation with Rich Ting at Disability Rights Pennsylvania (DRP) during which David expressed a strong desire to continue to work with RTF, and insisted that his new court appointed attorney, Mr. Ray Ghaner colluded with Huntingdon AAA to deny David his right to communicate. David then asked to have an advocate at the January 2021 virtual hearing but was told that he could not have an advocate present.

On February 5th, RTF staff dropped a care package for David at Embassy at Loyalsock. The package contained a cell phone that was obtained through the Pennsylvania Initiative on Assistive Technology (PIAT) Connect to Tech program. David had the phone in his possession for approximately two hours when he asked Embassy staff to assist him. Staff was happy to do so until they saw a sticker on the phone indicating that it was from RTF. Immediately, Alicia Stiger, David’s social worker at Embassy, stole the phone from him. This occurred while RTFCIL staff was on the phone with David! His conversation was literally cut off when the phone was taken from him by force!

David provided a handwritten note and ‘smuggled it’ to RTF staff after his phone was confiscated.

On February 20th, members of the grass roots group North Central Pennsylvania ADAPT went to provide David with a second telephone. After the facility confiscated the phone, Embassy staff called the police. The responding officer was told that there is a court order for David to have no contact with RTF. RTF has repeatedly requested to see the court order that makes contact with David a crime. The facility was not able to provide any document that supports this allegation.

Since February 2021, all contact with David ceases. Roads to Freedom has confirmed that David is no longer at Embassy at Loyalsock.

OCTOBER 2021 UPDATE: Roads to Freedom Center for Independent Living, and Mind Freedom International, issue a Human Rights Alert for David Italiano, who has been “disappeared” by the state.

We ask all conscientious people to: 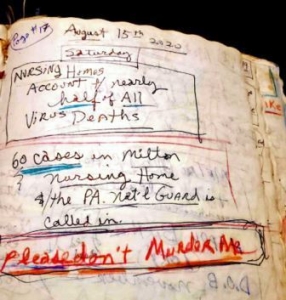 “Please Don’t Murder Me!” reads an excerpt from the journal of David Italiano, an individual who is being held captive and blocked from outside contact in Pennsylvania’s broken guardianship system.

MindFreedom International (MFI) in conjunction with Roads to Freedom Center for Independent Living (RTFCIL), is attempting to locate and establish the well-being of David Italiano an elderly person in Pennsylvania. He has ‘disappeared’ and denied outside contact by a government funded agency called the Huntingdon County Area Agency (AAA). RTFCIL had been assisting David with making his desired and requested transition from the nursing home back into living in his own home. The nursing home, Embassy of Loyalsock, along with his assigned guardian, blocked all contact with RTFCIL, going so far as taking away his personal cell phone. Later, he was transferred to an undisclosed residence and all requests for information as to where he was currently living have been ignored.

It has been more than a year since David has been held captive in Pennsylvania’s broken guardianship system, a black hole which many elderly people fall into regardless of the existence of better alternatives.

What is happening to him could happen to any of us!

We must protect David Italiano and in doing so, send a clear message to lawmakers and people who benefit from working in an oppressive system that we will not tolerate such human rights abuses.

Please sign this petition and help us find David Italiano and confirm his well-being.

Help David exercise his right to receive appropriate services to assist his choice to live independently in the home that he still owns.

Abraham Staples – ME
Scroll to top