Summary: My mother, Carol Hahn, has dementia. In January 2010, Mom did not know her address or phone number. She worried that she did not have any money, although she had over $1M in accounts. She forgot conversations within hours. Mom was fortunate to have MG, her “dearest friend in the world”, to care for her. They lived together since 2007. Mom often said, “He is a jewel.”

Mindy Martin never visited Mom at her home. Mindy Martin did not bring Mom new clothes. However, Mindy Martin exercised undue influence to take control of Mom and her entire estate. Until June 2010, I was Mom’s sole heir (only child), and I was beneficiary or co-owner on her bank accounts.

Chronology: On June 5, 2010, Mom was taken from her home by her accountants, Audrey Nesvold and Susan Balkom. Mom’s front door was broken inward. The deadbolt splintered the wood of the door jamb. However, San Bernardino Co. Sheriff’s Department determined that no crime was committed. Audrey Nesvold and Susan Balkom placed Mom at Mission Commons in San Bernardino, telling staff that Mom had no family and was abused by MG. Mindy Martin told Mission Commons that Mom had no money to pay her rent.

On June 10, five days after being taken from her home, Mom signed a Power of Attorney (prepared and notarized by Riverside attorney Jaxon Miller) giving authority to Mindy Martin. Mom signed a Trust making Mindy Martin successor trustee. I challenged Mindy Martin on the validity of those documents, given Mom’s advanced dementia. Mindy Martin quipped, “I asked the attorney about that, and he said it would be OK.”

On June 19, Mindy Martin moved Mom to Wildwood Canyon Villa in Yucaipa. Mindy Martin instructed Wildwood to isolate Mom from family. Wildwood confiscated Mom’s cell phone. Wildwood restricted all phone calls and visits, unless approved by Mindy Martin. San Bernardino Co. Sheriff’s Department and DA both stated, “There is nothing out of the ordinary.”

Mindy Martin made many false statements in her court documents. Based those false statements, Mindy Martin was appointed Temporary Conservator in August 2010. In December, the court finally ordered that MG and I are allowed “supervised visitation”. Cost for visitation is nearly $200/hour. The designated company refuses to schedule visits.

In September, Mom slept on a mattress on the floor. Mom slept in street clothes, as she had no pajamas. The few times family was allowed to visit, Mom was very hungry. Mom now weighs about 90 pounds. Mindy Martin cancelled a neurologic exam that I requested. The DA still says, “There is nothing out of the ordinary.” In San Bernardino Co., perhaps this situation is indeed “nothing out of the ordinary.”

In October, Mom was placed in hospice care under Dr. Victoria Rains. Dr. Rains refuses to talk to family and refuses to include family in “hospice family team meetings.” Dr. Rains and Mindy Martin continue to isolate Mom, hastening her death. Mindy Martin is likely already shopping for the new house that she asked Mom to buy for her. 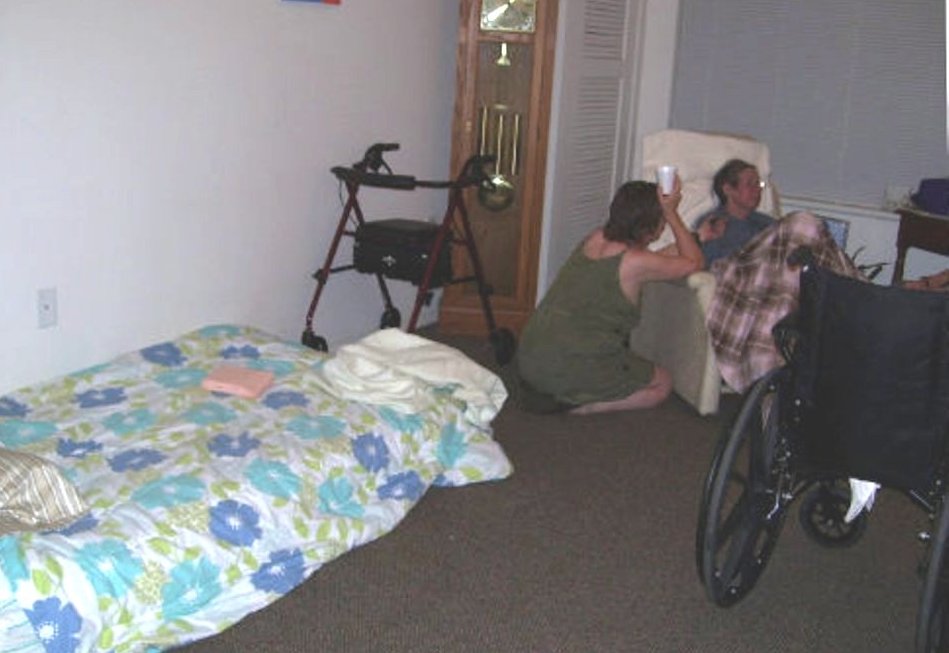 The Sins of Conservatorship: Why Britney Spears Compared It to Slavery

In June 2021, Britney Spears told the court that she was treated like a slave. She had no self-determination and no privacy in her daily life. She was forced into involuntary mental health treatment. She had no control over her work activities. She was forcibly medicated and punished when she did not follow orders.

Spears’ statements brought me back to 2010, when my mother was stripped of her civil rights. The last three years of my mother’s life, she was under absolute control of her conservator. If we dared object to neglect or abuse, retaliation was certain.

Before conservatorship, my mother shared a house with her “dearest friend in the world.” My mother and Martin met in 1987. Martin was a close friend of my mother’s second husband, Walter. After fourteen years of marriage, Walter grew infirm with Parkinson’s disease and asked Martin to “look after her for me.” Good to his word, Martin spent the next four years helping my mother clear Walter’s five-acre property and ready it for sale. Then my mother moved in with Martin. She said she was happier with Martin than she had ever been before. They enjoyed too few years together before Alzheimer’s disease stole her memories.

In spring 2010, I was going in circles with my mother’s healthcare company, trying to get her the care she needed. Then in June 2010, my mother’s two tax preparers broke in the door to her home, splintering the wood of the door jamb. They seized my mother and her financial records, and then they hid her from family. Sheriff’s deputies did nothing to protect my mother. Deputies wrote in their report that my mother and Martin were “ending their relationship.”

With my mother’s estate under her control, the step-granddaughter placed my mother in an assisted living facility and ordered staff to deny visitors. The Executive Director told me that I would not be allowed to see my mother. The Assistant Director said, “She is allowed no visitors and no phone calls.” A note in the facility records stated, “Resident is to NOT have any visitors other than [step-granddaughter.]”

The facility isolated my mother for over a year. She fell twenty-nine times in two months. She was severely malnourished and described as cachectic. There is evidence the facility covered up sexual assaults by a male caregiver.

As before, the Sheriff’s Department did nothing to help. The Department assigned the case to a deputy who killed a disabled African American man with a knee to the throat. The deputy laughed and cracked jokes when I begged him to help my mother. A few days later he called my cell phone, screaming at me and making outlandish accusations. He threatened to arrest me if I tried to visit my mother or if I filed complaints about his misconduct. His sergeant threatened that any attempt to contact my mother “would be seen as a criminal act.” The Deputy District Attorney told us, “There is nothing out of the ordinary. Stop calling!”

When my aunt asked if we could retain an attorney to represent my mother, the answer was no. The court assigned a CAC [Court Appointed Counsel] who regularly opposed my mother’s rights and wishes. He billed nearly $250,000 to her $1,000,000 estate.

My mother’s CAC concealed the June 2010 kidnapping, telling the court, “Prior to moving in early June … she actually went to the facility herself and chose this facility.” The CAC concealed my mother’s legitimate estate plan, telling the court, “Just for additional information … there are powers of attorney that do grant authority to [step-granddaughter] … it also nominates [step-granddaughter] as conservator if one were to become necessary.”

In a hearing of just sixteen minutes, the judge gave the step-granddaughter conservatorship over my mother. The judge stated the basis for his decision, “Another thing is that if the granddaughter is in fact the trustee, it makes sense … to have the same person operate in both the capacity as the [conservator] and trustee just — it just makes it easier to do.”

My mother’s CAC coached the step-granddaughter on strategy to isolate my mother. He told the court that he opposed my mother having visitors because, “It might inconvenience the facility.” He opposed my mother consulting with a neurologist for her dementia. His every action appeared calculated to drive billable hours. My mother and her family had no input into her care the last three years of her life.

When my mother objected to her situation, when she fought or begged for help, she was chemically restrained with psychotropic drugs Risperdal, Seroquel, and Haldol. Probate Code 2356.5 requires that a conservator must show the court “clear and convincing evidence” that a conservatee has would benefit from administration of such medications. My mother’s CAC testified, “Dementia powers would be a special power granted to a conservator pursuant to the probate court that would … give the conservator the power to authorize dementia medications.” When asked if the step-granddaughter obtained dementia powers over my mother, the CAC testified, “I don’t believe she did.” When the step-granddaughter was asked if she had dementia powers, she testified, “I’m not familiar with dementia powers.”

Psychotropic medications like Risperdal, Seroquel, and Haldol are not approved for treatment of dementia in elderly patients. The FDA requires a “black box warning” stating, “Elderly patients with dementia-related psychosis treated with atypical antipsychotic drugs are at an increased risk of death compared to placebo.” My mother’s prescribing physician was asked the following question when he was under oath. “When you were providing care and treatment for Ms. Hahn, were you aware of any types of FDA warnings against the use of antipsychotic drugs, such as Haldol, with respect to treatment of elderly patients with dementia?” The physician testified, “Yes.”

Sexual abuse is a recurring theme in conservatorship. In 2011 and 2012, my mother showed escalating agitation and fear of a male caregiver. We petitioned the court to move my mother to a different facility. The CAC opposed our request. Six weeks later, my mother was in the emergency room for vaginal bleeding. A caregiver reported “about one cup of blood.” The facility concealed the incidents. They quickly transferred my mother, and they terminated the male caregiver. When the male caregiver was questioned about sexual assault, he exercised his 5th Amendment right and refused to testify. When the CAC was asked to investigate sexual assault, he investigated the wrong facility.

Conservatorship is nearly always a life sentence unless the estate is depleted during the life of the conservatee. After a wealthy conservatee dies, conservators and attorneys often continue litigating over distribution of the estate. Some families report a decade or more of court involvement in the estate, leaving meager distributions for legitimate heirs.

My cousin declared, “I can’t call it a justice system until I see some justice.” When the absolute power of conservatorship is joined with the apathy and negligence of probate courts, injustice and predation are unavoidable outcomes. Injustice is unavoidable when courts disregard probate codes and deny any semblance of due process. Predation is unavoidable when conservators and attorneys have unfettered access to the wealth of America’s “Greatest Generation.” While predators liquidate their estates, conservatees often endure isolation from loved ones, forced sedation, emotional and physical abuse.

Any American, regardless of mental capacity, can find themselves ensnared in the “legal-industrial system” of conservatorship. Given courts that apply “all the procedural rigor of processing a traffic ticket,” a few unsubstantiated allegations can condemn a person to “civil death.” We must thank Britney Spears for her courage to publicly share her story and draw America’s attention to one of our most shameful institutions.