Yolanda is the mother of Mareea Watts and Tony Hutton (NASGA and Banking Abuse Advocate), both the Bendigo Bank and Bank Manager Christine Frankham have now been placed on NASGA’s “Wanted List” and all information received by NASGA from Banking Abuse Wistleblowers in relation to either Australian or American Banks will be kept Strictly Confidential .. !!

Bendigo Bank Manager Frankham and her friend Susan  Bogaard had been appointed Guardians and Financial Managers of Yolanda Hutton (who in June 2007 was diagnosed with Advanced Dementia), until they relinquished their role prior to a Guardianship Hearing on 26/7/2011, due to intensive Investigation by the Australian Media .. !!

After the first night’s screening another family contacted Channel 7 in Sydney, advising them that their Aunt (Joan Douglas) had been befriended and allegedly targeted by Bendigo Manager Frankham in a similar way to Yolanda Hutton, when Frankham was manager of the Commonwealth Bank at Brookvale NSW… !!

Yolanda Hutton also had an account at the same branch of the Commonwealth Bank, at the same time and both where customers of Bank Manager Christine Frankham…!!

Christine Frankham left Commonwealth Bank in July 2002 and joined the Bendigo Bank at Dee Why as the Branch Manager,  Yolanda Hutton accounts immediately followed Manager Frankham to the Bendigo Bank… !!

A Current Affair (Channel 9, in Sydney) also screened a half hour special on 11/11/2011 that started with the story of a Sydney Taxi Driver. who was allegedly Targeting and Defrauding Vulnerable Elderly People, it then led into the Yolanda Hutton’s Story and her involvement with Bank Manager Christine Frankham….!!

The Family gained documentary evidence in the diaries of Just Better Care, found in Yolanda’s home when Police forced access on 21/05/2011…!!

Just Better Care called at Yoland’s home every day for about 3/4 of an hour to prepare her a meal, the diaries showed evidence of the horrendous alleged Neglect and Abuse of Yolanda, by her then Guardians Bendigo Bank Manager Christine Frankham and Frankham’s friend Susan Bogaard… !!

Yolanda was in a Deplorable State on the 21/5/2011 when Police Gained Forced Entry to her home, as allegedly Bendigo Bank Manager Frankham and Susan Bogaard, had the locks changed for the third time at Yolanda’s expense, to deny Yolanda’s Family access… !!

Yolanda had been on the timber floor for up to 20 hours, wearing only a thin nightie, when Police entered the home. It had also been a very cold night, Yolanda was hypothermia, tachycardia, had a urinary tract infection, with impacted feces and severe scalding in her Genital Area… !!

In each of these wills Manager Christine Frankham was the Executor, with both Frankham and Bogaard’s percentages of Yolanda’s Estate increasing, until the final will in 2009 arranged by the alleged perpetrators (before Yolanda was freed from this nightmare, making her last and final will)  .. !!

In the last will of this “Undue Influence” saga both Manager Frankham and her friend Paid Care Giver Bogaard, were to inherit the entire estate of approximately $1.5 Million Dollars, with an additional clause inserted, that if anything happened to either of them, then their share would have gone to “Their Children”. They only allowed $20,000 to be given to one of Yolanda’s Granddaughters Jacki Riley. Jacki was 1 of the 8 Grandchildren of Mrs. Yolanda Hutton… !!

Interestingly the Wills were prepared by Northern Beaches Solicitor Peter Hedley Wood from Wood Marshall Williams at Brookvale, who for some unknown reason MUST work under the supervision of another Attorney…. !!

It’s also interesting to point out that Christine Frankham had been allegedly involved in a similar situation before, with another Elderly Women named Joan Douglas who died in 2004… !!

As we stated before in July 2002 Bank Manager Frankham left Commonwealth Bank, allegedly “Head Hunted” by the Bendigo Bank, where she became the Manager of it’s Dee Why Branch… !!

Allegedly on 26/4/2000 Christine Frankham arranged to take Joan Douglas to prepare a new will with David Tuckerman (solicitor) from Rees Tuckerman in Brookvale, whereby Manager Frankham became a beneficiary receiving  $30,000 and Bank Manager Frankham was also included in the line of beneficiaries for Joan’s house at Beacon Hill… !!

Allegedly Joan then had great difficulty in the loan being repaid and as Joan’s demands became more public, the loan was eventually repaid on 30/4/2001, allegedly $10,000 was withdrawn by Manager Frankham from Yolanda’s Visa Credit Card account at Commonwealth Bank in Brookvale, where Frankham was previously a Manager (the card had a limit of $10,000 & had never been used before)… !!

Joan Douglas died on 18/12/2004, but Christine Frankham was unaware that Joan had made another will, where in Bendigo Bank Manager Frankham was no longer a beneficiary… !!

Allegedly when Bendigo Bank Manager Frankham discovered that she would no longer beneficiary, she then confronted Joan’s Nephew Frank Henry and major beneficiary, demanding $40,000. On 26/1/2005 allegedly Bank Manager Frankham arrived at the Nephew’s house at night in an “Aggressive Manner” demanding $40,000 or she would contest the will, at that point Frank Henry told her she was trespassing, asked her to leave and closed the door in her face..!!

Documents to support the above relating to the Joan Douglas allegations, where also given to the NSW Police. .. !!

In both cases neither Bendigo Bank Manager Christine Franham nor Susan Bogaard, where related to either Yolanda Hutton or Joan Douglas in any way… !!

When Yolanda was in Manly Hospital in July 2007 following another fall, Christine Frankham, Susan Bogaard and Peter Hedley Wood Solicitor (Attorney) on 13/7/2007, were intercepted by alert Hospital Staff trying to allegedly coerce Yolanda Hutton into signing a Enduring Power Of Attorney (POA)… !!

The Hospital Legal Team referred the matter to Manly Police, who said there was nothing they could do (haven’t we heard that before)… !!

Allegedly both Bank Manager Christine Frankham and Susan Bogaard, were also caught taping conversations with Hospital Staff without their permission… !!

It wasn’t discovered by the Family until June 2007 that Bendigo Bank Manger Frankham and her friend Susan Bogaard (with the help of Solicitor Peter Hedley Wood), had taken out Enduring Guardianship over Mrs. Yolanda Hutton on 8/9/2006 (quit the Conflict of Interest wouldn’t you say..)

In the Bendigo Banks “First & Final Warning Letter” to Christine Frankham dated 10/10/2007 (this letter was also found in Yolanda’s house, when police forced entry), the Bendigo Bank was aware of and point out the obvious irregularities on the Form Of Appointment Of Enduring Guardian… !!

The Form was allegedly falsely witnessed and dates altered, it is interesting to note that both the Guardianship Applications and Wills where prepared by Peter Hedley Wood (Solicitor) and the Bendigo Bank had also been aware that Bank Manager Frankham had become a beneficiary of Mrs. Hutton’s Will (the Bendigo Banks obvious Conflict of Interest just keeps getting better)..!!

It is also alleged that the Bendigo Bank became aware that Bank Manager Christine Frankham and Susan Bogaard, had been allegedly withdrawing upwards of a $1000 a week in Cash Checks from Yolanda Hutton’s account for a considerable time….!!

It is hard to believe that this point that the Bendigo Bank would not of also been aware that the appointment of it’s Manager and a Paid care Giver Friend of Mrs. Hutton was against the NSW Guardianship Act, as neither were Eligible to be Yolanda’s Guardian.. !!

But as we are all starting to learn, that when Banks and their Employees are involved the usual laws don’t apply ….. at this point it is also worth noting that the Dee Why Branch of the Bendigo Bank that Frankham was the Manager of, sat right underneath the offices of the NSW Public Trustee (as they where then called back then) …!!

There is also a 60 minute CD recording of the Banks Investigation interview of Bendigo Bank Manager Frankham on 3/8/07, by the then Bendigo Bank Fraud Investigator Dean Butler (yes the cops got a copy of that too)… !!

Subsequently a Forensic Accountant has verified that there is substantial monies allegedly unaccounted for from that period, with the Bendigo Bank seemingly following the very same playbook as all Banks, deny everything and blame anyone but themselves…!!

It is interesting to note that Fraud Investigator Dean Butler has left the Bendigo Bank and now works for The Australian Securities and Investment Commission (ASIC), when approached recently he said “I could never understand why Manager Frankham was not dismissed, as I advised the bank that she should be”…!!!

On the 26/7/2011 Yolanda Hutton’s Daughter Mareea Watts was appointed Yolanda’s Guardian and visiting rights were suspended on advice from the NSW Police, for Bendigo Bank Manager Frankham and her friend Susan Bogaard who were under Police Investigation.

Yolanda did change her will of her own free will and subsequently passed away on the 24th of April 2013, the Financial Ombudsman Service (FOS) as usual proved to be USELESS in recovering any money and the NSW Police have not yet Charged either Bendigo Bank Manager Christine Frankham or her alleged conspirators .. !!

New South Wales like most of Australia has NO Elder Abuse Laws, we spoke with World Elder Abuse Expert San Diego District Attorney Paul Greenwood, Paul is actually an English Solicitor and Barrister who has spoken in Adelaide, South Australia at the World Elder Abuse Awareness Day Conferences (held on June 15th) ..!!

As Paul Greenwood put it, Australia’s Legal System is living in the Dark Ages, with outdated Laws and Attitudes that can no longer be tolerated in the 21st Century, with the Elderly and Disabled denied Justice, Yolanda was Denied Justice because under NSW Law, Yolanda was deemed an Unreliable Witness because of a Disability.. !!

On the advise of then Queensland Member of Parliament for Gaven Dr. Alex Douglas (funny how NO NSW Politician cared), the Family notified ASIC and where advised that the neither ASIC nor the Australian Federal Police had been notified before about the matter by the Bendigo Bank, as a  Mandatory Requirement by Law .. !!!

The Bendigo Bank has been less than truthful to the Family, Media and also to the former Member of the Queensland Parliament Dr. Alex Douglas, when he also made inquires with Mr. Mike Hirst the CEO of the Bendigo Bank (apparently Mike Hirst just loves telling Porkers and we are being kind to him with that)…!!

When the matter was finally reported to the Australian Securities and Investment Commission the Solicitor for ASIC , made his own investigations and on his own initiative sort advise from another Solicitor who was an expert on Elder and Guardianship Matters..!!

He wanted to proceed against the Bendigo Bank, but he was told to stand down and not to proceed by his superiors (haven’t we all heard that before), we have been advised that Christine Frankham is now allegedly on an ASIC Watch List. (whatever that means). !!

Prime Minister Tony Abbott’s Office knows of the case and also knows of the Federal Governments Obligations under the United Nations Treaty and CRPD, that was signed and ratified by Australia for Equal Justice for those with Disabilities, but as with most cases involving a bank he and his Government has done NOTHING…!!!

Australia has been rocked by ongoing Financial Scandals involving its Banking Industry with two Senate Inquiries having now been held, the latest (ending in late 2014) looked into a Financial Planners Scandal involving the Commonwealth and Macquarie Bank’s, with the Senators recommending a Royal Commission be held.

Subsequent to that Senate Inquiry other Australian Banks have been implicated in the the Financial Planners Scandal, also other Unethical and Possibly Illegal Banking Practices that has devastated  Tens of Thousands of Australia’s Seniors, Pensioners, Elderly, Disabled Persons and Farmers..!!

These Banks include the National Australia Bank (NAB), Westpac, ANZ Bank, St. George, Rural Bank and Bank of Queensland (BOQ)  just to name a few and it is not just limited to banks, as the entire Financial Services Industry is now being questioned, including Australia’s Insurance Companies, Public and Private Trustees.. !!

To date the Australian Government seems to be turning a blind eye to the Critical Situation at hand, with rampant  Elder and Disabled Abuse running out of control, neither Prime Minister Tony Abbott or Treasurer Joe Hockey appear to be willing to show the Leadership required to confront the issue and end the abuse. .!! 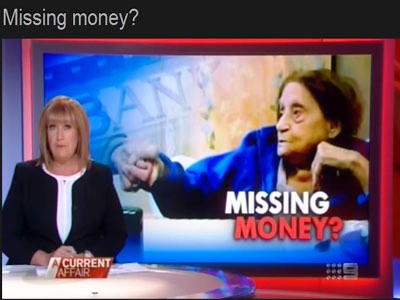