Mother of Member Antoinette Konkol Grewal
Compelling Investigation:  This could be your family – or you!

Wieslawa “Irena” Konkol’s (female, 84 years old) guardianship has been fraught with nothing but a malicious disregard for the truth. Subsequently, it has been a cover up of the on-going actions, criminal negligence and possibly  irreversible harm to Irena.  The background to this informational  protest is  entirely from excerpts of public record in the U.S. District Court, Western District of Missouri Case No. 5:09-cv-06145-HFS and Missouri Probate Case No. 09BU-PR00791 (Circuit Court of Buchanan County,  the quotes directly from the  record).   IT  IS IMPOSSIBLE THAT THIS  IS AN  ISOLATED   INCIDENT.

Irena became a ward of William McMurray (Public Administrator, Buchanan County) by improper means and procedure in September, 2009. Cursory review of this case docket confirms seven (7) glaring violations, making this Guardianship null and void. Ever since, Irena has been INTENTIONALLY NEGLIGENTLY DEHYDRATED, STARVED AND OVERDRUGGED WITH NON-FDA APPROVED DRUGS FOR HER AGE AND DIAGNOSES, WITHOUT LAWFULLY REQUIRED MONITORING. She now has drug-induced: Parkinson’s, Dystonia, Extra-pyramidal and Pyramidal symptoms and Neuroleptic Malignant Syndrome — all of which are being denied, yet the medical records memorialize the truth.

Whereas,  her accurate diagnoses  are:

“Pre-September 1, 2009, the competency determination timeframe, Irena was living on her own (i.e., managed own finances) but SHE wanted proper medical intervention for her falls, considering she had falls induced by drugs known to potentiate falls post September which resulted in a dual pelvic fracture. She had a recurrent balance disorder (Meniere’s Disease) and had the right of refusal of a brain work up, as she wanted access to ENTs first. Dr. C. Ross Shuman’s (Heartland Regional Medical Center] initial 9-1-09 Psych evaluation states “She describes how concerned she is about falling.  She states that she  has earlier seen physicians who indicate the problem is within her inner ear … I discussed with her the recommendations  made for diagnostic evaluation.  The patient is  adamant that she will  have no tests.  She is clear in her conviction that the analysis done a few years ago pertains to her current problems.” [False, November 2008] This case is about  a group of doctors autocratically  choosing to compel what  they wanted instead of the requirement to advocating for the patient’s and family’s clear and concise wishes.”

“Multiple neighbors and family had regular contact with Irena through August 31, 2009 (with incommunicado timeframes) attest that she was competent. Being stubborn, old, frail, visually and hearing impaired does not warrant becoming a ward of the state. Then being drugged for a false “Alzheimer’s/Dementia” diagnosis, simply because she was distraught from being made homeless by an illegal competency process initiated by an evaluation that is null and void. (See Exhibit 4)”

Please note: Irena is not a wealthy woman, subsisting solely on SSA, but has the richest heart of any blessed Mother. This is all about fulfilling Irena’s wish to return to California per her 10/28/08 Durable Power of Attorney and awaiting burial plot.

“Under William McMurray’s care, Irena’s health has gone downhill and been teetering near death.” Beyond this advocate’s humble opinion of illegality, immorality and unethical behavior further actions/inactions must be brought to the forefront, as other wards must be similarly affected:

A.  Denied Irena access to her Veteran’s Administration benefits.– “Irena is a WW II war hero, grandfathered in as an Allied American The U.S. States government granted her the status of a U.S. Veteran.  (See Exhibit E) She was diagnosed with Post Traumatic Stress Disorder (PTSD) by the VA. William McMurray has denied Irena her rightful access to her VA insurance and greatly needed PTSD therapy. She will most likely need placer,ent there to aid her detoxing/withdrawal and to stabilize her vitals. Coming out of a reaction from Neuroleptics can take 40-120 days [with proper treatment, IV vitamin/minerals], if  lucky.”

B.  McMurray personally cancelled a doctor’s medical order. IS HE AND/OR A NURSING HOME ALLOWED TO PRACTICE MEDICINE IN MISSOURI? — “IN DIRECT VIOLATION OF THIS COURT’S 11-18-09 INSTRUCTIONS FOR ANTOl ETIE TO GET AN ORDER FROM THE , William McMurray has personally denied Irena access to lie-sustaining Pulsed Electro Magnetic-Frequency (PEMF) technology (Medicare approved 1980). An order was written on 10-19-09 and 3-27-10, these Rxs have been ignored by two nursing homes, but fully approved by the Heartland Regional Medical Center’s Bio-Medical Engineering department for safety, …”

C.  “Denied Irena’s right-to-counsel. Crim[ inals on death row have a right to Prejudice has greatly affected her health status.”

D.  Irena’s primary language is NOT English, per federal law, she was entitled to an interpreter. “Denied [language] interpreter How cold Irena get any medical treatment let alone effective treatment? Additionally, disregard for Irena’s Post Traumatic Stress Disorder (PTSD), Traumatic Brain Injury (TBI), [Meniere’s Disease], and Stockholm Syndrome conditions. thus a categorical disregard of her complete medical history, which has negatively affected the direction and outcome of her care so that she may live – as is as her desire.”

Civil Rights Requirements to Provide Translators — “Not only do health care facilities have a duty to provide language assistance services to !ensure quality medical care, it’s also required by federal law if the facility receives federal funding. Title 1v1 of the Civil Rights Act of 1964 mandates providing all patients with equal access to services, including ensuling that LEP patients are able to communicate effectively with their providers.

To comply with Title VI in this context, the hospital must assess the language needs of the community it serves, develop a comprehensive written policy, train its staff on all language policies and procedures, and monitor at least annually to evaluate LEP needs and services.

Title VI requirements included in the Office of Minority Health’s National Standards on Culturally and Linguistically Appropriate Services in Health Care (CLAS) mandate federally funded health care organizations to: offer and provide language assistance services to LEP patients at all points of contact in a timely manner during all hours of open free of charge; provide verbal and written notices to patients in their preferred language informing them of their right to receive language assistance; assure the competence of language assistance provided and refrain from using family members as interpreters unless requested by the patient; and provide patient-related written materials and signage in the languages commonly represented in the community.

Hospitals that fail to provide adequate language services to afford all patients equal opportunity to receive quality health care are subject to federal civil rights complaints. Some states also have laws requiring formal language assistance programs and regulations for how they must be implemented. However, rural hospitals with limited budgets may not be required to provide the same level of language services as  urban or larger hospitals.”

E.  Per federal mandates, Irena has been improperly drugged: “(1) only FDA-approved medications for seniors, (2) Medications for proper diagnosis and (3) Medications not contraindicated. ESSENTIALLY, MEDICATIONS NOT FDA-APPROVED FOR IRENA’S AGE AND DIAGNOSES WERE ADMINISTERED (See Exhibit C, 9-12):

F.  Illegal Medicate/Isolate methodology “… as per the federal laws governing nursing homes, 24 hr access [MUST be permitted).William McMurray is unilaterally denying Antoinette and all of Irena’s friend’s access to Irena, despite her grave condition with no just cause. Many trumped up allegations which are substantiated by the Department of Health for Senior (See Exhibit C). Antoinette , like any accused party, has a right to know so that she can properly defend her reputation, character, etc. It appears that slander and defamation are taking place.”

G.  ‘William McMurray has violated federal Informed Consent Laws (pursuant to the Supremacy Clause, supra) in permitting Irena to be administered neuroleptic drugs. Despite Antoinette pre-informing him and Mark Laney, MD that Irena did not have dementia and that Haldol, in particular, could not be given during the reign of her (Durable Power of Attorney] DPA. Despite the DPA, communications and the [federal] Habeas Corpus and [Probate documentation], this willful act of administering these antipsychotic medications have practically destroyed and/or ended Irena’s life.”

H.  “Error in appointing the Public Administrator in the first place.” — “In Pro Per filing was proper, whereas the Petition for Appointment of Guardianship/Conservatorship did not have to be presented by a local attorney. The privilege of petitioning the government without counsel stands, per the First In this case, (since this Irena does not have 2 to 3 years for the court process and nor the family to spend $20-30K to maneuver through false non-adjudicated perceptions,) it means that Irena must die?”

(1) Is this an isolated incident? Or is this being done with numerous McMurray wards, which are believed to have no interested family, no oversight?

(2) Are Buchanan wards being drugged with non-FDA approved NeuolepticJPsychotropic drugs? A 3rd party visit would be confirmatory. The Thorazine shuffle (a drug-induced walk), a glazed over/dazed appearance with no emotional connectivity remaining, unexplained drooling, rigidity of body and/or limbs, gnashing of the teeth/protruding of the tongue, etc.? Is this what you want to happen in loved ones or ‘Our Golden Years’?

Note: To place a ward on Medicaid needlessly is no different than stealing directly out of the taxpayer’s pocket.

For information and/or documentation of above, contact Antoinette Konkol (daughter):
LILATl@aol.com (323) 844-3310 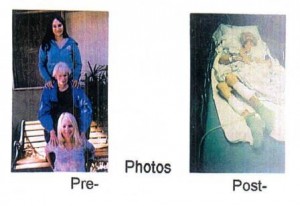