A medical proxy directive is intended to assure an individual that if she or he becomes incapacitated that there will be some one to make decisions on their behalf. While that seems reasonable enough, New Jersey law leaves individuals who are subject of a proxy at risk for fraud and abuse.

Here in New Jersey, there is no threshold to qualify that the proxy be of good character, nor be able to read, write or do basic math, why it has even been said that ‘Mr Wiggles the dog could obtain a proxy over another if he could get his paw print on the directive and two persons signed it as witnesses’.

The proxy as it stands in New Jersey today does not require that the signatures affixed to the proxy be notarized or filed in any court to be reviewed by any judge, or even reveal the existence of any such proxy for those who can demonstrate a bona fide need to know about the existence of the proxy.

Think of it, some one has life or death control over another and it is not subject to any courts checks and balances!

In the example of Mary Sudovar who is 101 years old, her daughter MaryAnn (Sudovar) Mirko, obtained a covert proxy witnessed by Mirko’s daughter MaryAnn (Mirko) Lazio, and daughter in law Dawn (Gormley) Mirko all residents of Wayne Township, who then after having obtained the proxy told no one else about its existence until such time as it was when Mary’s youngest daughter, Barbara, discovered that Mary was choking and had her rushed to Chilton Hospital ER and there after the proxy was used by Mirko against Barbara who when she discovered Barbara hand feeding Mary during her recovery saying “Don’t feed her! don’t feed her!”

Since then, Mirko has thrown her weight around to prevent Barbara from even visiting her mother, with Mirko using every excuse imaginable to discourage Barbara from seeing her mother Mary, an alleged incapacitated person. I use the word alleged because in New Jersey it takes two doctors to sign off on Mary’s incapacitation and in Mary’s case two doctors have not done so.

Mirko, in many instances, has exceed the spirit and intent of the medical proxy to Mary’s distinct disadvantage, for instance Mary has expressed the desire to live in her own home. Mirko exerts the proxy to say it is not in Mary’s interest to live in her own home even though Mary has health care workers to care for her at yet another daughters home where Mary is confined against her will, Kathleen (Sudovar) Proulx’s residence.

Mirko asserts the proxy to deprive Mary of food and liquids while at the same time she has in the past administered potentially lethal injections of morphine despite the fact the Mary has no known disease state what so ever, its just that Mary is on in her years and Mirko has access to morphine and has made the decision to administer the drug.

While all of this plays out Mary’s son Stephen G. Sudovar a past president of Roache labs, obtained a power of attorney from Mary signed in New Jersey but filed in Delaware wit no paper trail in New Jersey where Mary lives.

Speaking for myself, all of this is far too much power being taken by others in the affairs of another, even their mother when they stand to collect many thousands of dollars from the estate. It is time for the New Jersey legislature to revisit the medical proxy criteria to assure every one that there are checks and balances to protect the most vulnerable in our society that simply do not exist today in the medical proxy directive here.

Follow Mary Sudovar’s story, written by Carrie K. Hutchens and published on The American Clarion, starting in September 2012 with “Mary Sudovar: The Children at War.“

“Life sometimes has unexpected turns that take us to situations we never supposed possibly to become our own. It could never happen to us…not us. I’m sure that is what Mary Sudovar once thought. Never her or her family, she might have thought, if ever a negative consideration crossed this special woman’s mind in the first place. So how did it come to be that the children she so loves are now at odds and the court system is involved?….” 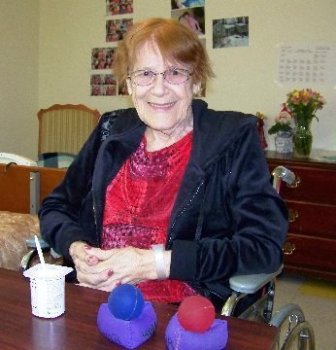