In the first video, Melissa talks about Kim’s guardianship, the effect on Kim and on the whole family.

A request for help to expose probate court and guardianship corruption. 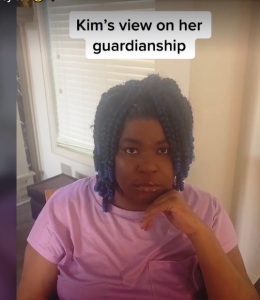 In this video, Kim speaks about what the guardianship means to her.

“Kim Marie Edwards, who was an elementary school teacher and worked hard to feed the homeless and others who didn’t have enough food, suffered a brain injury in 2004 due to hospital mistake while trying to give birth to her only child.

We were told by our mother’s attorney  that it was best to place Kim under guardianship.

Ever  since 2009, after  her law suit settlement  and while in probate court, over $200,000 dollars came up missing from her trust, which is managed by a lawyer who used unethical and illegal ways to take over the trust.  Kim’s money has been taken out of her social security check by her former guardian and the former guardian refuses to state where it’s located.  The new guardian keeps holding Kim’s social security checks when she is supposed to give them to Kim for her benefit; they tell her she has no right to an attorney; she is ignored when she tells them she doesn’t want a guardian.  The judge allowed the former guardian to get away with malfeasance and perjury.  And even though the alternative to guardianship, family support, has been in place for almost 18 years, and Kim is capable of making informed decisions with support decision making assistance, the court still keeps her under guardianship and allows all of these court offices taking her money.” …  Please click to READ MORE and sign the petition!

Lucas McNair – IN
Scroll to top