On March 2, 2001, my Aunt Helen Fabis, 87, was taken by ambulance to the Critical Care Unit of Memorial Community Hospital, Edgerton, profoundly confused, malnourished and in critical condition, and suffering from the effects of Carbon Monoxide poisoning: 2000 PPM. 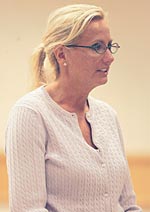 Staff photo
SimaneSpeaks
Kathleen Simane addresses the court prior to her sentencing for stealing from an elderly relative. 07/20/06
Olmsted

On March 8, 2001, Kathleen Simane, Aunt Helen’s grandniece, was appointed her Temporary Guardian. In less than 54 days of Simane’s tenure, Simane spent all of Aunt Helen’s life savings (bank accounts, SS checks, proceeds from sale of stocks, cash), in excess of $75,000.

My Aunt died a pauper in a nursing home on April 30, 2001. Impoverished by Simane, Aunt Helen was waiting to apply for Medicaid and public assistance.

Simane used Aunt Helen’s money for her personal extravagances: breast enlargement procedures, a brand new, fully loaded 2001 Chevy Suburban, her rent and utilities, training, food and supplies for her dogs. She left Aunt Helen penniless – not even enough funds for final arrangements and burial. Rock County Probate Court took no action; the Temporary Guardianship was “closed” without any accounting or inventory.

July 20, 2006, Judge James P. Daley admonished Kathleen Simane: “The funds should have been used for her (Helen Fabis) benefit, but you used them for your benefit…You took money from someone who could not protect herself. You were supposed to protect her…We as a people will be judged by how we treat the least in our society and those who cannot help themselves.”

Count One Theft By Bailee: Judge Daley sentenced Simane (shown below) to prison for two years, followed by eight years of extended supervision and, Count Two Theft By Bailee: Five years in prison, followed by 10 years extended supervision as a consecutive sentence. The judge stayed the second sentence in favor of 10 years probation. He ordered Simane to pay restitution: $78,289.81 (not the total amount stolen from my Aunt). 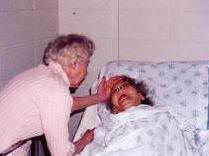