Our beloved mother, Ersileen Marquardt, was 99 with dementia.  I had been my mother’s caregiver for twelve years and my brother had been her P.O.A. and medical care proxy since 2008, when our mother was lucid.

Our mother was in transitional care at Parmly on the Lake, with a meeting on Dec. 6, 2021, pertaining to our mom’s discharge date on Dec. 14, 2021.  Parmly at the time was helpful on getting medical equipment for my mom for discharge.  My brother emailed Parmly that he was the P.O.A. and medical care proxy for our mom.  Parmly told my brother (C.P.A. and computer consultant) that he would be making all medical and financial decisions for our mom.
Between Dec. 6th and discharge day, an employee pulled her mask down breathing all over our mom and continued visiting with her. Horrified I went to the administrator.  I could tell he was angry at me for filing a verbal complaint.

Parmly knew I was a strong advocate for our mom and would notice flagrant violations of this substandard nursing home. Severe retaliation would follow.

On discharge day, the nurse practitioner let me know we would not be leaving, and if we did they would call the police, refuse to send medications, and no in home care!  Crude words from the N.P.  “This could be fatal,” she said.  “Are you prepared to die?”

Our mom responded with “I guess so if I have to.”  The next day, Dec. 15, they told me that our mom had one to two months to live!  What a shock!  One day discharge, next day one to two months.

In the mean time Parmly had turned me into M.A.R.C.   All I had been doing was trying to get our mom stronger for discharge. I was exonerated by the county. Humiliating!

Then my brother received a call from a guardian.  They told my brother that they trumped the P.O.A  and medical proxy.

Parmly would not allow my brother or me to attend. It was virtual at the nursing home.  They hauled our mom into the room with complete strangers.

Our mother was very angry coming out of  the court rm. “They asked me personal questions in there!  I didn’t like it!!  The government needs to stay our of our family!! “

She went on and on about hoping she said the right things in there.  I told her she wouldn’t say anything bad about me or my brother.  I said that is all that matters. “Never,” she  replied.

I told her that they might limit my visitation.  She said it would break her heart. Cried.  Some judges are complicit in the abuse.  The judge had declared her incapacitated.  That is why you get P.O.A. and medical proxy!

Next day they told me I could only visit our mom an hour in the morning and an hour in the afternoon.  My brother was stripped of any say. Staff said it was gut-wrenching to see how badly she wanted me, her daughter to be there. Lonesome, frightened at times, and heart broken.

They were elated when our mom was dying. Got away with it! They threatened to not allow us to be at her bed side when close to death.  They acted like they were doing us a HUGE favor!

Now I want to tell you what a tremendous lady our mom was!!!!

I don’t have the words to express what our mother meant to her family and friends.

She was one of those people that was loved by all and had such an impact on others’ lives.  I have thought of writing a book, “My Unique Mom, Ersileen”!  She arrived into the world with an identical twin sister, Eileen.  Mom had the unusual name.  The only one in the U.S. spelled with a capital E.  She and her twin were full of mischief and adventure!  The twins tied for salutatorian in high school.  They were avid readers!  One gave half the speech and the other one gave the other half.  The twins were married in a double wedding ceremony.  The twins were B.F.F.s.  The twins were teachers, impacting many lives.

Our father was a school administrator.  Mom and dad had 58 years of a wonderful, wonderful marriage. My father passed away in 2005 with cancer.  We were told by our community that we were the million dollar family. Mom, dad, son, and daughter! We had so much fun together!  Dad had been my mom’s B.F.F.

In 2009 our mother came to live with me, her daughter.  We felt it was safer and she needed companionship! We immediately became B.F.F.s.  Almost inseparable except for my teaching and tutoring.  A deep love, compassion, and caring for each other developed rapidly!  So much fun together!

One doctor said they had never seen such a close bond between a mother and daughter.  Mom was an exercise enthusiast at age 97. She would walk in the vortex pool for an hour straight!  She also attended swimming kick box classes well into her nineties.  The swimming instructor said, “I believe we have the oldest aerobic kick boxer in the U.S., or maybe the world!” Mom just worked harder!! She loved flowers, delicious fruit, the color blue, our kitty, Hope, reading, and crossword puzzles (up to one week before passing)  She always had a smile on her face!!

In May of 2021, at age 99, our beloved mother had to have two stents put in for severe narrowing of the aortic valve at the point going into the heart! Critical! Not even a month later she had a bowel obstruction.  Not expected to survive.  Then after surgery her lungs filled with 3 liters of fluid.  I coached her for a day and a half.  She pulled through.  A medical miracle at 99.

One doctor at the Univ. of MN asked my mom what she attributed to living to 99.  She replied, “good friends.” Then she rattled off our phone no.  The doctor and I laughed! He said, “You can’t make this up!”

Also, in the hospital her roommate said she should go on a station in Mpls for unique and interesting people!!   The nurses at the U of MN all wanted to take her home.  She was so lovable!

Her dementia was exacerbated after the bowel obstruction surgery.  It was a difficult road but she arose to the occasion like usual.

This unique and inspirational lady passed away on Jan. 29, 2022. A resident at Parmly cried when told of mom’s passing.  She said, “That smile of hers!”  She had brightened her day everyday.  At our mom’s funeral, people spoke of how she had left a positive impact on their lives.  Some couldn’t get up and speak, because they said they would have broken down.

A life well lived, filled with compassion, kindness, and a great sense of humor.

Smile when you think of Ersileen and see kindness!  She surely will smile back down at you from heaven!  A life well lived, Ersileen!! 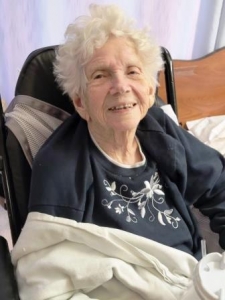