Elizabeth Harding Weinstein, a 49 year old stay at home Mother of 3 for 17.5 years, a Columbia University graduate, previous ER/ICU nurse, and a competent and capable woman was trafficked into an Illegal Guardianship by my Domestic Violence Abuser, Brian Stryker Weinstein, as a tool of expediency for Brian’s abuse, seizure of my assets during a contentious divorce, and to dismiss my well-founded federal cases against Brian, his attorneys and his agents.  Brian is a law partner at Davis Polk & Wardwell with heavy influence over the Courts.

Case 31053-2021 was petitioned by Brian Stryker Weinstein, a year after I filed for divorce, while Brian had no contact with me for over a year.   It was  brought before rogue judge Janet C Malone, in New York Westchester County, absent of jurisdiction as I resided in another state.  Malone made a tacit admission she lacked jurisdiction and signed my Pro Se OTSC acknowledging my competency.   Malone proceeded despite her lack of jurisdiction, and I was denied legal fees to get a lawyer of my own choosing, denied a jury trial, the case was sealed over my objections, I was denied access to the court, denied transcripts, and when it was unclear if hearings occurred,  judge Malone concealed them and refused to respond.

The first Guardian appointed declined after I made my competency clear.  A second Guardian, Kenneth L Bunting, acted maliciously, hung up on me, then eventually accepted the case, seized all my assets, withdrew my cases against my husband and his agents in federal court & requested one be amended to be “dismissed with prejudice,” willfully displaying Bunting’s malpractice and malfeasance.   (7-21-CV-01996-CS and 7-21-CV-04543-CS in NYSD). Bunting found one private account with money used to feed myself seized and closed it without notice.   I am forced to depend on the kindness of others for food and housing.

My children, who love & adore me (the pic above taken just weeks before all this happened), in 1 year since I was rendered homeless and stripped from their lives, are brainwashed from the trauma and abuse, and have Stockholm Syndrome.

Brian Stryker Weinstein and Kenneth L Bunting are trying to make sure I disappear and am never heard from again. 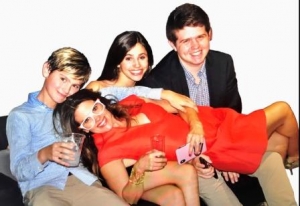